Though it remains unknown how life began, there is a community of scientists who suspect it occurred in or around deep sea hydrothermal environments.

At such sites, water heated by contact with hot rocks from Earth’s mantle flows into the lower ocean, passing over and through minerals which are themselves precipitated by the interaction of this hot water with cold seawater. The minerals often include metal sulfides, such as iron sulfide, also known as pyrite or fool’s gold. As they precipitate, these mineral precipitates begin to form channels for the hot vent water, and since the metal-containing minerals are electrically conductive and the compositions of the vent water and ocean water are different, an electrical gradient is created–something like a natural battery–with electric current flowing from the vent water through the minerals and into the ocean.

A team led by Tokyo Institute of Technology/Earth-Life Science Institute (ELSI) scientists have now shown via careful laboratory experiments that this current can reduce the metal sulfide minerals to native metals and mixed metal sulfide/metal conglomerates, which in turn can reduce and catalyze the reduction of various organic compounds.

The team led by Norio Kitadai, an affiliated scientist of the Tokyo Institute of Technology/Earth-Life Science Institute (ELSI) as well as a scientist at the Japan Agency for Marine-Earth Science and Technology (JAMSTEC), produced a set of electrochemical reactions in the laboratory that are suspected to have been generated in early ocean floor hydrothermal vent environments. They demonstrated that metal sulfides, including those of iron, copper, lead, and silver (some of which are common constituent minerals in hydrothermal vent environments), were converted to native metals by electroreduction. Complexes of metal sulfide and reduced metal were also produced during the process. 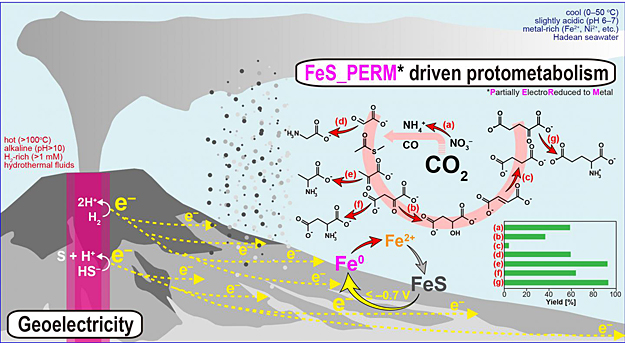 Conceptual diagram of a hydrothermal vent assumed to have been widely distributed on the Hadean ocean floor. Hydrogen and hydrogen sulfide contained in hydrothermal fluids are oxidized inside the vent, and the generated electrons flow away from the vent along the electric potential difference between hydrothermal fluids and seawater, which generates a steady electric current (hydrothermal electricity generation). CREDIT Kitadai et al. (2019) Science Advances

It was also discovered that several organic chemical reactions indispensable in modern life were promoted by these complexes. The authors believe the metals and metal sulfides served as reducing agents and catalysts for these reactions.

This research identifies a new mechanism for the creation of organic compounds driven by hydrothermal electricity generation in hydrothermal fluids. An exciting implication of this work is that, since electrical current appears to be universally generated in deep-sea hydrothermal vent environments on Earth, anywhere such hydrothermal processes occur throughout the cosmos should likewise promote this kind of chemistry. Indeed, recent astronomical and spacecraft-based observations suggest there may be vigorous hydrothermal activity on the moons of Saturn and Jupiter (Enceladus and Europa), and hydrothermal activity was likely common on early Mars.

Further research on the effects of various metals and electric gradients is expected to unveil much more about the environmental conditions that can facilitate prebiotic chemistry. This could ultimately lead to a better understanding of the universality and similarity of life in the universe.

Tokyo Institute of Technology (Tokyo Tech) stands at the forefront of research and higher education as the leading university for science and technology in Japan. Tokyo Tech researchers excel in fields ranging from materials science to biology, computer science, and physics. Founded in 1881, Tokyo Tech hosts over 10,000 undergraduate and graduate students per year, who develop into scientific leaders and some of the most sought-after engineers in industry. Embodying the Japanese philosophy of “monotsukuri,” meaning “technical ingenuity and innovation,” the Tokyo Tech community strives to contribute to society through high-impact research.

The Earth-Life Science Institute (ELSI) is one of Japan’s ambitious World Premiere International research centers, whose aim is to achieve progress in broadly inter-disciplinary scientific areas by inspiring the world’s greatest minds to come to Japan and collaborate on the most challenging scientific problems. ELSI’s primary aim is to address the origin and co-evolution of the Earth and life.

The World Premier International Research Center Initiative (WPI) was launched in 2007 by the Ministry of Education, Culture, Sports, Science and Technology (MEXT) to help build globally visible research centers in Japan. These institutes promote high research standards and outstanding research environments that attract frontline researchers from around the world. These centers are highly autonomous, allowing them to revolutionize conventional modes of research operation and administration in Japan.