An international team of researchers, led by the University of Massachusetts Amherst, recently announced in the journal Current Biology that an amoeba called Naegleria has evolved more distinct sets of tubulins, used for specific cellular processes, than previously thought. Their insight has a host of implications, which range from developing treatments for brain-eating infections to better understanding how life on earth evolved such enormous diversity.

Much of life on earth relies on a series of polymers called microtubules, composed of tubulin, to complete a wide range of tasks inside their cells. These microtubules are like the 2x4s of the cell and are used in everything from helping the cell to move, to transporting food and waste within the cell and giving the cell structural support.

Microtubules also help in mitosis, which is when a single cell divides into two by first duplicating its chromosomes and then pulling each set to opposite sides of the cell before dividing itself in two. One of the key moments in mitosis is when a spindle, made up of microtubules, grabs hold of the chromosomes and helps separate them into two identical sets.

This is where Naegleria comes in. Biologists had previously known that Naegleria uses a specific kind of tubulin during mitosis. But the new study, led by Katrina Velle, a postdoc in biology at UMass Amherst and the paper’s lead author, shows that Naegleria also employs three additional distinct tubulins specifically during mitosis. One pair of tubulins are used only during mitosis, while the other, the flagellate tubulin, specialize in cellular movement. The authors of the study then compared the tubulins and the structures they build to each other and those of more commonly studied species.

The implications of this work are exciting and range from the practical to the theoretical. For instance, the team studied a species of Naegleria, Naegleria gruberi, which is closely related to Naegleria fowleri­–an amoeba that can eat your brain. “If we can understand the basic biology of Naegleria,” says Velle, “we can learn how to kill it by devising drugs that target the amoeba’s unique tubulins.”

But Naegleria also helps us to understand the basic rules that govern life on earth. “All organisms have to replicate themselves,” says Lillian Fritz-Laylin, professor of biology at UMass Amherst and a senior author of the paper. “We know how the replication processes works for some cells, but there’s a huge set that we don’t understand. Naegleria lets us test the rules scientists have come up with to see if they hold here.”

To conduct their research, the team relied in part on the state-of-the-art microscopy equipment at UMass Amherst’s Institute for the Applied Life Sciences (IALS), which combines deep and interdisciplinary expertise from 29 departments on the UMass Amherst campus to translate fundamental research into innovations that benefit human health and well-being. The team grew the Naegleria cells, stained them with different chemicals so that the tubulins would glow, and then took extremely high resolution, 3-D photographs, which allowed them to measure, count and analyze the different microtubule structures.

“I’ve spent most of my career studying the mitotic spindles of more common cells, like mammalian cells,” says Patricia Wadsworth, professor of biology at UMass Amherst and one of the paper’s senior authors. “The tools of modern biology allow us to explore more diverse cells, like Naegleria, which is in some ways similar, but also very different.”

“People often think of technology driving science,” says Fritz-Laylin. “But in this case, the questions we are trying to answer are so fundamental to how life on earth operates, and of such interest to so many scientific specialties, that we needed to assemble an international team of various experts. In this case, collaboration, teamwork and effective communication drove the science.” 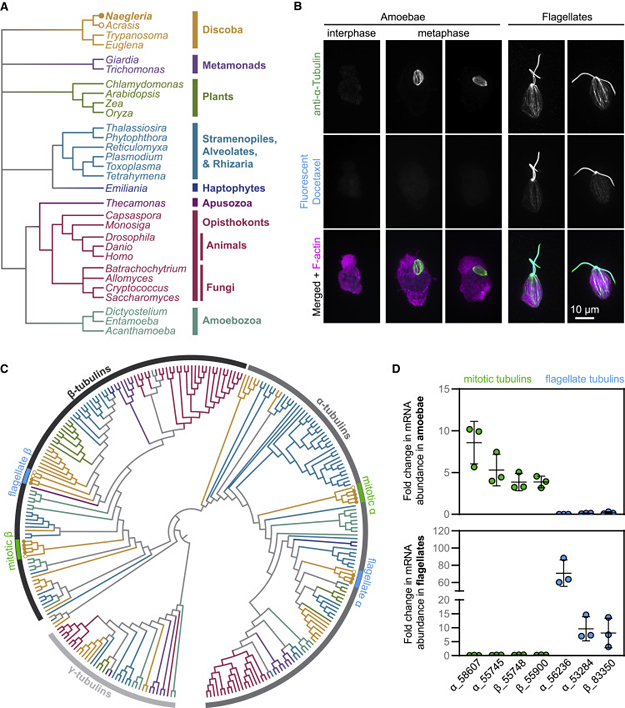 Naegleria has flagellate and mitotic microtubule arrays composed of distinct tubulins,, Velle et all, Current Biology (A) The evolutionary relationships between Naegleria and other eukaryotes are shown using a cladogram (branch lengths are meaningless) modified from Velle and Fritz-Laylin.15 (B) Amoebae from a growing population (left) or flagellates from a differentiated population (right) were fixed and stained with antibodies (anti-α-tubulin clone DM1A, green) and tubulin Tracker (fluorescent docetaxel, cyan) to detect microtubules and Alexa Fluor 488 conjugated Phalloidin to label F-actin (magenta). Maximum intensity projections of cells are shown. (C) The evolutionary relationship of γ-, α-, and β-tubulins from the species in (A) are shown using a cladogram (using the color scheme from A; see Data S2 for the full tree). The tree is rooted on gamma tubulins, and shows mitotic (green) and flagellate (blue) tubulins from Naegleria (closed circles) and Acrasis (open circles). (D) The fold changes in tubulin mRNA in amoebae compared with flagellates (top) or flagellates compared with amoebae (bottom) were calculated from data reported in Fritz-Laylin and Cande (from 3 experimental replicates encompassing 6 technical replicates).16 Each point represents one experimental replicate, and lines denote the average ± standard deviation (SD). Tubulins are labeled with JGI identification numbers.