Data from Martian meteorites suggest the planet may have two hydrogen reservoirs beneath its surface, according to a recent study by NASA’s Astromaterials Exploration Research and Science (ARES) Division and a team of planetary scientists. The study, published in the journal Nature Geoscience, could shed light on how Mars formed and evolved.

From the inside out, Mars consists of a core, mantle, crust and atmosphere. Meteorites that once were a part of Mars before crashing into Earth provide insight into the planet’s surface and history. By examining meteorites with formation ages billions of years apart, the researchers sought to determine the isotopic composition of hydrogen to understand the evolution of the planet’s crust.

The scientists analyzed sections of two Martian meteorites, ALH 84001 and NWA 7034, about 4.1 billion and 1.5 billion years old, respectively, using a mass spectrometer. The instrument enabled the researchers to measure the hydrogen isotopes in the meteorites.

Isotopes are different forms of the same element, with an equal number of protons but with different numbers of neutrons within their atomic nuclei. For example, deuterium is an isotope that is a heavy version of hydrogen because it has a neutron, whereas light hydrogen lacks one. Both forms contain one proton, which defines each as the element hydrogen. 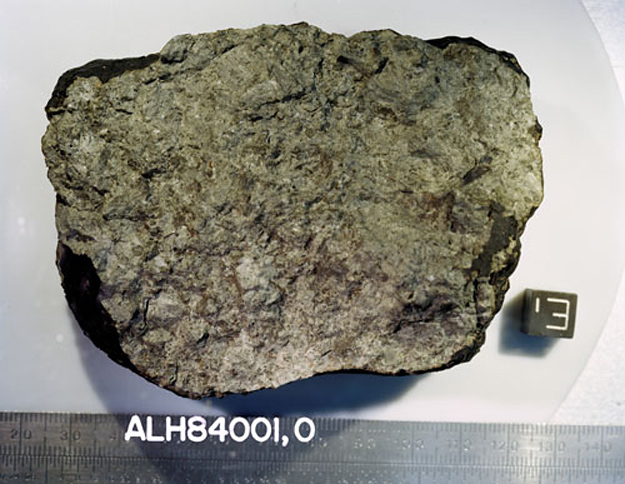 “A challenge we often run into when we try to do these kinds of measurements is terrestrial contamination and contributions from cracks,” said Jessica Barnes, lead author of the study and assistant professor of the University of Arizona’s Lunar and Planetary Laboratory. “But the mass spectrometer we used at NASA’s Johnson Space Center in Houston has the spatial resolution to avoid cracks and using our established protocols we were able to account for any contribution from contaminants.”

The team discovered that the meteorites have similar deuterium-to-hydrogen (D/H) ratios, which are consistent with other values for the Martian crust. This indicates that the hydrogen and water content of the planet’s crust has been relatively stable throughout its history.

The evidence prompted the researchers to question conventional wisdom about a single hydrogen reservoir in the planet’s mantle. As a result, the team developed an alternative model with two underground hydrogen reservoirs to explain the isotopic ratios of the Martian crust.

“The crust was essentially the same for four billion years and that got us to reassess the data that represented the mantle,” said Francis McCubbin, second author of the study and astromaterials curator within ARES at Johnson. “We found the mantle has two different hydrogen reservoirs – one heavy hydrogen, one light hydrogen – and that the crust represents an intermediate value between these two mantle reservoirs.”

The results of the study pave the way for new avenues of research into the geological history of Mars. Many samples from the Martian mantle have not been thoroughly studied and could clarify different models about the planet’s formation. NASA’s Moon to Mars exploration approach calls for a future mission with crew to the Red Planet. Just as NASA plans to collect new lunar samples under the Artemis program, astronauts sent to Mars could someday bring home samples that complement their observations and analyses of the planet.

“A lot of geochemical studies can be used to address this question further,” McCubbin said. “I think that this study is going to get the scientific community thinking about Martian meteorites and what they mean for the early history of Mars in a way that hasn’t been looked at in over a decade.”

For more information on how NASA studies Mars, visit: https://ares.jsc.nasa.gov/