Discovery Of The Oldest Evidence Of Mobility On Earth

Located in the Franceville Basin, the deposit allowed scientists to re-date the appearance of multicellular life on Earth to 2.1 billion years – approximately 1.5 billion years earlier than previously thought (600 million). At the time, researchers showed that this rich biodiversity co-occurred with a peak in dioxygenation of the atmosphere,2 and developed in a calm and shallow marine environment.

In this same geological deposit, the team has now uncovered the existence of fossilised traces of motility. This shows that certain multicellular organisms in this primitive marine ecosystem were sophisticated enough to move through its mud, rich in organic matter.

The traces were analysed and reconstructed in 3D using X-ray computed micro-tomography, a non-destructive imaging technique. The more or less sinuous structures are tubular, of a generally consistent diameter of a few millimetres, and run through fine layers of sedimentary rock. Geometrical and chemical analysis reveals that they are biological in origin and appeared at the same time the sediment was deposited.

The traces are located next to fossilised microbial biofilms3 which formed carpets between the superficial sedimentary layers. It is plausible that the organisms behind this phenomenon moved in search of nutritive elements and the dioxygen, both produced by cyanobacteria.

What did these living elements look like? Though difficult to know for certain, they may have been similar to colonial amoebae, which cluster together when resources become scarce, forming a type of slug which moves in search of a more favourable environment.

Until now, the oldest traces of recognised movement were dated to 570 million years ago; an estimate which appeared to be confirmed by the molecular clock4. Evidence of motility found in rock that is 2.1 billion years old raises new questions regarding the history of life: was this biological innovation the prelude to more perfected forms of movement, or an experiment cut short by the drastic drop in atmospheric oxygen rates which occurred approximately 2.083 billion years ago? 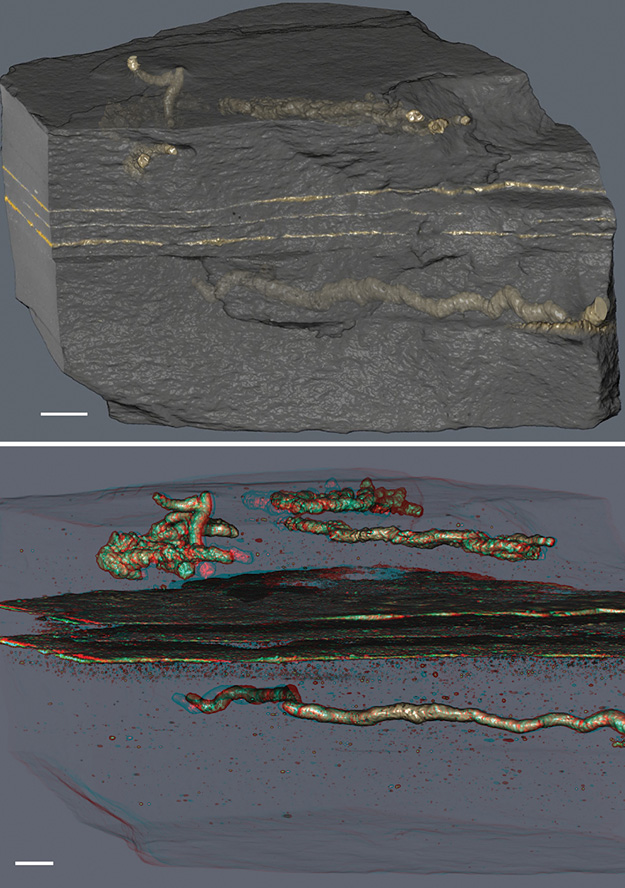 Micro-tomography is used to display the 3D morphology of tubes reflecting the paths of movement through the sediment. The tubes are filled with pyrite crystals (generated by the transformation by bacteria of biological tissue) found in layers of clay minerals.
Parallel horizontal layers are fossilised microbial mats. © A. El Albani & A. Mazurier / IC2MP / CNRS – Université de Poitiers