A growing body of research links the ways that organisms react to their environment at a cellular level to a surprising variety of behaviors and physical changes. The mechanism is genetic, but it involves adding extra information to DNA rather than changing it. Scientists call this mechanism epigenetics, and it plays a role in changes that humans and other living things experience in space.

Now a hot field of study in the biosciences, epigenetics is generating research on many specific organisms aboard the International Space Station.

According to a paper from the National Institute of Environmental Health Sciences, epigenetics includes any process that alters gene activity without changing the actual DNA sequence and that leads to modifications that can pass to offspring. Essentially, it involves information added to the DNA sequence of the four bases or building blocks of DNA: adenine (A), guanine (G), cytosine (C) and thymine (T).

“The DNA sequence is the blueprint for any living thing, for who and what you are,” says Sarah Wallace, a microbiologist at NASA’s Johnson Space Center in Houston. “Epigenetics refers to changes in an organism due to changes in genes being expressed, or turned on or off, without altering that blueprint. Think of it as not changing where a window is on the wall of a house, but adding a curtain over that window for shade.”

Various environmental cues can cause organisms to reveal new aspects of their genetic blueprint. Unlike a genetic change or mutation, an epigenetic change can reverse if an organism leaves the environment that caused it.

Any outside stimulus that the body can detect – from chemicals to trauma to exercise – has the potential to cause epigenetic changes. Many epigenetic changes are positive or even essential, but some cause major adverse health and behavioral effects, including cancer, cardiovascular and autoimmune diseases, and changes in cognitive function. 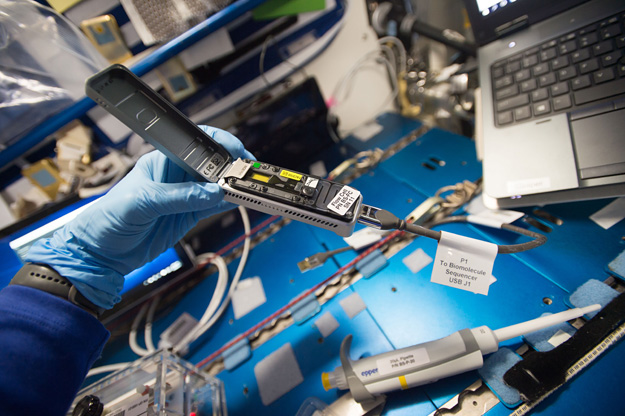 The MiniON DNA sequencer in use on the space station to demonstrate that DNA sequencing is feasible in an orbiting spacecraft to identify microbes, diagnose diseases and understand crew member health, and potentially help detect DNA-based life elsewhere in the solar system. Credits: NASA Larger image

Epigenetics research in microgravity involves a variety of organisms. “We’ve seen from years of analysis that the spaceflight environment changes gene expression,” Wallace says. “In every organism and cell type we’ve sent to space and looked at, we’ve seen that it changes. What we don’t always know is how or why, and epigenetics could help tell us. Through the study of epigenetics, we may be able to delineate the pathway that cells use to adapt and survive in microgravity. When we understand the mechanics of how and why it happens, we can put the process together and learn to control positive changes or prevent negative ones.”

The landmark Twins Study from NASA’s Human Research Program brought together 10 research teams from around the country to observe changes to the human body after nearly a year-long exposure to spaceflight hazards. The study compared a wide range of samples and measurements collected over the length of the mission of astronaut Scott Kelly (now retired) to those of his identical twin brother who remained on Earth, retired astronaut Mark Kelly. One aspect researchers compared was the brothers’ epigenetic changes, finding that Scott experienced epigenetic changes inflight, but to a degree no greater than Mark’s on Earth. Furthermore, most of Scott’s epigenetic changes took place during the second six-months of the mission and may not have been observed in a shorter mission.

A study of bone loss that astronauts experience on extended missions relies on epigenetics. Researchers who evaluated the formation of bone cells in microgravity using human blood-derived stem cells (BDSCs) as a model reported specific epigenetic changes in the cells in space. The Italian Space Agency investigation is called Role of the Endocannabinoid System in Pluripotent Human Stem Cell Reprogramming under Microgravity Conditions (SERISM).

APEX-03 and APEX-04 are studies of how plants grow in microgravity. These studies examined DNA methylation and gene expression in Arabidopsis thaliana plants grown from seeds aboard the space station. A member of the mustard family, this plant commonly serves as a model organism for cellular and genetic studies of flowering plants.

The Space Life and Physical Sciences Research and Applications Division (SLPSRA) of NASA’s Human Exploration and Operations Mission Directorate at NASA Headquarters in Washington sponsors the APEX investigations as part of its mission to conduct research that enables human spaceflight exploration.

In addition to widespread changes in patterns of gene expression, researchers found epigenetic changes in the space-grown plants.

“That answers the question of whether epigenetics has a role in a plant’s physiological adaptation to spaceflight,” says Robert J. Ferl, a researcher at the University of Florida. “Plants were using epigenetic processes to modify their genome in order to thrive in space. In APEX-04, we disrupted a plant’s ability to make those epigenetic changes to see if those plants suffer stress more in space, and the answer is yes. That not only tells us that it happens but also that it is important that it happens in space.”

When plants experience unusual environments, they change gene expression patterns. Using epigenetic processes to mark genes prepares the next generation for encountering the same environment. One type of epigenetic process that researchers can detect is methylation, or the addition or removal of a methyl group (CH3) in DNA, predominantly where C bases occur consecutively.

“A specific methylation pattern shows us which genes the plant thinks are important in order to live in space,” Ferl says. “Using that information, we could breed plants better enabled for space, just as we can breed plants better adapted for high salt environments on Earth.”

The next step, he added, is to ask whether those markers persist across generations. In fact, a hot area of study is whether epigenetics pass to subsequent generations – or, as Wallace puts it, whether mom having a curtain over the window passes on to her offspring.

“In an upcoming spaceflight experiment, we are testing whether the epigenetic changes induced by spaceflight in one generation of Arabidopsis are inherited in the next,” says University of Florida researcher Anna-Lisa Paul, co-investigator with Ferl. “The big question is whether an inherited epigenome confers an advantage to the next generation of space-grown plants. That’s what we hope to determine.”

Expect to see more research on epigenetics in space. “It is the kind of work that begs to be done,” Ferl says. “And now, we have capabilities to start doing more of this work, such as being able to sequence DNA in space.”

While changes at the level of DNA in organisms exposed to space have always been there, Wallace explains, we haven’t always been able to see them. “Most traditional DNA sequencers don’t provide that level of information without prior processing of the sample, but a tool on the space station called the MinION can. We can culture organisms onboard and see changes in methylation patterns, for example, without having to fix or freeze the sample, processes that could themselves alter things. We can get a real-time snapshot to help us define these changes as they are happening and potentially how they are passed down.”

Ultimately, epigenetics could
help scientists put curtains over windows that need them and keep them off those that do not.