Microbiologist Jill Mikucki first saw a photo of Blood Falls during a class for her master’s degree at Portland State University. It immediately captivated her.

Fast-forward about a dozen years. Mikucki is now an assistant professor in the Department of Microbiology at the University of Tennessee in Knoxville . Investigating the weird and wonderful world of Blood Falls – a red-stained splash on the face of the Taylor Glacier caused by microbes lurking somewhere below the ice – has remained a passion throughout her career.

Her latest project will probe deeper into the mystery of the subglacial ecosystem, with some help from German engineering.

“We’re still struggling to understand what causes Blood Falls itself. Why does it come out right there at the snout? … It’s very interesting to think about how long these [microbial] systems may have been isolated and what happens when they’re below the ice with no light,” said Mikucki after returning to McMurdo Station from the McMurdo Dry Valleys where she had spent more than two weeks testing the technology that will be used to burrow into Taylor Glacier next year.

Mikucki and her U.S. colleagues have teamed up with a group of German engineers, led by Bernd Dachwald from FH Aachen University of Applied Sciences , who have developed an instrument that may one day bore into the icy moons that surround Jupiter and Saturn.

“Blood Falls represents a great analogue of what you might encounter going through ice and collecting some liquid sample below another world,” noted Mikucki, whose project, Minimally Invasive Direct Glacial Exploration (MIDGE), is supported by the National Science Foundation’s Division of Polar Programs . The DLR German Space Administration is providing funds to develop IceMole for a project called Enceladus Explorer

The apparent existence of microbial life at Blood Falls also has implications for Snowball Earth – the theory that the planet was once covered almost entirely in ice hundreds of millions of years ago. “Even if you have thick ice, that doesn’t deter life. There’s plenty of energy down there,” Mikucki said.

The IceMole, as the German probe is called, is a long rectangular metal box with a copper head and screw at one end capable of melting its way through ice – but not just straight down like a conventional electro-thermal drill. Differential heating at the tip allows IceMole to change directions. It looks a bit like a very large hypodermic needle poised to inoculate a glacier.

“We are able to steer it. It’s not a very quick turn. It has a turning radius of 15 meters,” said Gero Francke, an engineer from FH Aachen. Scientists are looking to so-called cryovolcanoes on Enceladus, the sixth largest moon around Saturn, as one possible place in the solar system that may harbor life. 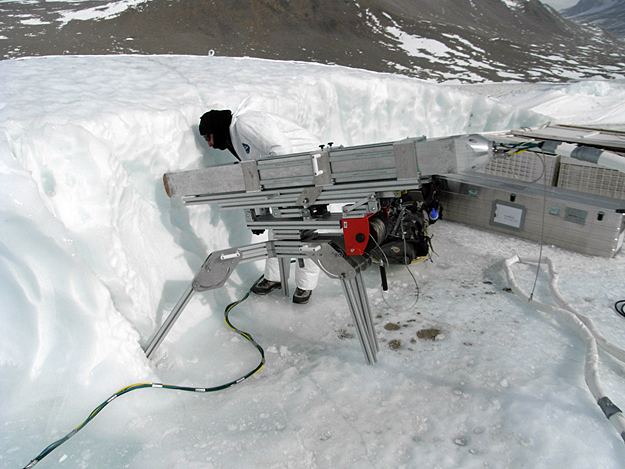 An engineer prepares to test the IceMole on Canada Glacier. The maneuverable drill will be used in 2014-15 to bore into Taylor Glacier and take samples from a conduit that carries briny liquid to the surface where Blood Falls spills onto Lake Bonney in the McMurdo Dry Valleys. Photo Courtesy: Clemens Espe

Life is already known to exist below Blood Falls.

In 2009, Mikucki and colleagues published a paper in the prestigious journal Science that first suggested that microbes were dwelling in a highly saline reservoir below Taylor Glacier, which flows into Taylor Valley from East Antarctica.

Both are named after Griffith Taylor, the senior geologist on Capt. Robert F. Scott’s Terra Nova expedition, who first encountered the blood-like-stained feature in 1911. Taylor had assumed it was red algae.

In reality, Blood Falls results from the discharge of iron-rich, saline liquid that percolates from a briny subglacial pool somewhere upstream of the massive river of ice. The liquid oxidizes rapidly at the surface, giving the ice its distinctive bloodstained coloration.

The light-starved environment means that the microbes are getting energy from another source other than photosynthesis, likely grinding away at the bedrock below the glacier and manipulating sulfur and iron compounds to survive.

The reservoir itself appears to be marine in origin, seawater that was trapped by tectonic forces and later capped by ice. The water is nearly three times as salty as the ocean, and reaches the surface as a liquid through some sort of channel in the glacier. That subglacial conduit will be IceMole’s eventual target.

“We don’t know how [the brine] might change biologically and chemically, as it meanders out of the Falls,” Mikucki said.

Mikucki’s team took the first steps toward answering that question among others during the 2013-14 Antarctic summer. She and the FH Aachen engineers put the IceMole through its paces on the nearby Canada Glacier. That included testing clean-access protocols to ensure samples returned from below Taylor Glacier aren’t contaminated.

“It turns out [IceMole] was relatively easy to clean,” Mikucki said. “Sample return is still one of the huge challenges in the space industry, as well as the subglacial environment.”

Blood Falls was adopted as an Antarctic Specially Protected Area , or ASPA, last year under the Antarctic Treaty System , which provides additional protections for sites deemed of particular environmental, scientific, historic, aesthetic or wilderness interests. A permit is required to enter an ASPA.

IceMole’s maneuverability is also a big asset for subglacial research, according to Mikucki. “Blood Falls is amorphous. We don’t know exactly the shape and morphology of that crack,” she explained. “It’s a dynamic feature. We don’t know if it’s just dynamic at the surface or if it’s somewhat dynamic internally as well. It may not be a straight line. You may not be able to drill straight through. … There may be a need to drive it around.”

FH Aachen engineer Clemens Espe explained that once IceMole reaches the crack or conduit that supplies the brine to the surface, the robotic probe has an internal pump that can send water to the surface. IceMole also has plastic bags within its body to store samples.

Navigation deep in the ice is the big challenge. The IceMole uses a laser gyroscope to steer. Acoustic pingers on the surface measure the probe’s position independently using triangulation. An ultrasound sensor in the melting head should detect the crack or any obstacles in the way. “We accomplished what we needed to do here, which was demonstrating that the instrument could work in polar ice,” Mikucki said. “This is really a new step in ice-drilling technology.”

Meanwhile, U.S. colleagues Erin Pettit from the University of Alaska Fairbanks and Slawek Tulaczyk at University of California Santa Cruz conducted geophysical experiments on Taylor Glacier near the terminus to pinpoint the location and characteristics of the conduit that carries the brine to the surface where it pours out of Blood Falls.

Pettit used ground-penetrating radar to identify anomalies in the ice below the surface of the glacier for where there might be a channel. Tulaczyk then deployed strings of thermometers into four boreholes above the area that Pettit identified through radar analysis.

The thermometers are capable of detecting heat fluxes in the ice. Tulaczyk explained that the brine, which remains in liquid form despite being minus 6 degrees Celsius, partly freezes as it rises to the surface through the minus 15-degree ice. That releases a tremendous amount of heat.

How much heat? Based on preliminary measurements from the thermom
eter strings, which will collect data for about a year, the heat flux from freezing is about 20 times higher than geothermal sources. It would be the equivalent of a 500-degree rise in temperature in a thousand meters of ice.

“This is an extremely deep temperature gradient,” Tulaczyk said. “That’s the signature of a lot of freezing.

“It takes an unusual set of conditions to squeeze water out to the surface through such cold ice,” he added. “It shouldn’t exist. It shouldn’t be there. But it is there.”

Previous geophysical surveys in 2004 of Taylor Glacier have identified a possible source or reservoir about 5.5 kilometers up the glacier using ice-penetrating radar. In 2010, Mikucki and colleagues teamed with Danish company SkyTEM Surveys to use airborne electromagnetic mapping technology.

Employing a helicopter to fly a huge transmitter loop around the McMurdo Dry Valleys, SkyTEM uses a “transient electromagnetic method” to create magnetic fields that penetrate into the ground. The magnetic field will last longer through a good conductor like seawater versus one with low conductivity, or high resistivity, such as ice.

The SkyTEM data also found highly conductive material in the same location as the 2004 survey. “It appears that this method works pretty well and it’s revealing another line of evidence that below Taylor Glacier is pretty significant conductive material,” Mikucki said.

Scientists like Mikucki and Tulaczyk are only now beginning to understand just how diverse life is in the harshest of climates. Both are also principal investigators on the Whillans Ice Stream Subglacial Access Research Drilling (WISSARD) project that bored into a subglacial lake in 2012-13 and discovered signs of microbial life there as well, though very different in terms of what was found.

“They are different, but why wouldn’t a whole continent be patchy and different in its ecosystems? Just because it’s covered by ice you wouldn’t expect it to be the same,” Mikucki said.