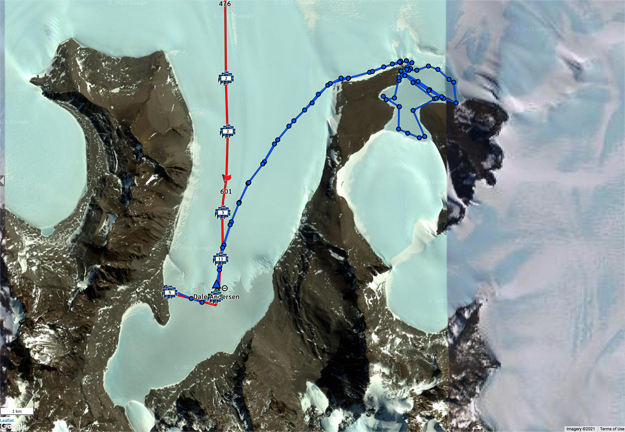 Map showing the arrival route (in red) that Dale and his team have used to travel to their basecamp at Lake Untersee and today’s excursion (in blue) over to lake Obersee. Larger image

Lake Untersee (German: Untersee, “Lower Lake”) is the largest surface freshwater lake in the interior of the Gruber Mountains of central Queen Maud Land in East Antarctica. It is situated 90 kilometres (56 mi) to the southwest of the Schirmacher Oasis. The lake is approximately 6.5 kilometres (4.0 mi) long and 2.5 kilometres (1.6 mi) wide, with a surface area of 11.4 square kilometres (4.4 sq mi), and a maximum depth of 169 metres (554 ft). The lake is permanently covered with ice and is partly bounded by glacier ice. Lake Untersee is an unusual lake, with pH between 9.8 and 12.1, dissolved oxygen at 150 percent supersaturation, and very low primary production in the water column. Despite the high oxygen supersaturation in most of the lake, there is a small sub-basin at the southern end that is anoxic and its sediments may have a higher methane concentration than those of any other known lake on Earth.

Lake Oberseee (German: Obersee, “Upper Lake”) is a permanently-frozen glacial meltwater lake lying between Sjøneset Spur and Mount Seekopf in the Gruber Mountains of Queen Maud Land, Antarctica. The lake was discovered by the German Antarctic Expedition under Alfred Ritscher, 1938-39. Lake Ober-See is located a few kilometers to the northeast of Lake Untersee (German: Untersee, “Lower Lake”), a larger lake but similar in most respects to Lake Ober-See, and the best-studied lake in the region. Divers have dived in Lake Ober-See to study its microbial communities.

Keith Cowing: These updates in 1996 and 1997 were done directly by Dale Andersen while in Antarctica to a webserver in my condo in Reston, Virginia. As best we can tell this was one of the earliest – if not the first – website to be maintained from Antarctica.