Two asteroids (203 Pompeja and 269 Justitia) have been discovered with a redder spectrum (※1) than any other object in the asteroid belt between Mars and Jupiter.

The discovery was led by HASEGAWA Sunao, Associate Senior Researcher at ISAS JAXA, with an international team of researchers from MIT, the University of Hawai’i, Seoul National University, Kyoto University and the Laboratoire d’Astrophysique de Marseille

These two asteroids have a steeper spectral slope than the D-type asteroids (※2), which were thought to be the reddest objects in the asteroid belt. Rather, their spectra resembles that of trans-Neptunian objects and Centaurs in the outer Solar System that have a very red spectrum (※3).

The results of this research were published in the Astrophysical Journal Letters, an academic journal of the American Astronomical Society (AAS), on July 26, 2021.

The internal structure of a large planet such as the Earth is differentiated into the core, mantle and crust. However, such differentiated bodies that lost most of the information about their formation prior to differentiation that occurred during the early stages of Solar System formation. For information about that era, we need to examine undifferentiated (primitive) objects. Some meteorites that have landed on the Earth are thought to have been ejected from primitive minor bodies such as asteroids. Ordinary chondrite meteorites and carbonaceous chondrite meteorites are typical examples. Ordinary chondrites are thought to have been derived from celestial bodies that were formed in the inner region of the Solar System, within the water ice snow line (※4), while carbonaceous chondrites are thought to have been formed in the outer region past the water ice snow line.

It is known that such primitive objects occupy most of the asteroid belt (between 2.1 to 3.3 astronomical units, au (※5)) that sits in the Solar System between Mars (at 1.5 au) and Jupiter (5.2 au). Asteroids that correspond to the ordinary chondrite meteorites on Earth are called S-type asteroids (※2), and a sample from a member of this S-type class, asteroid 25143 Itokawa, was returned to Earth by the Hayabusa (MUSES-C). The asteroids thought to correspond to carbonaceous chondrites meteorites are known as C-type asteroids (※2) and the sample from asteroid 162173 Ryugu returned by the Hayabusa2 spacecraft is an example of this asteroid class.

Looking towards the outer edge of the Solar System around Neptune, there are many trans-Neptunian and Centaur objects that resemble the asteroids of the asteroid belt. Some of these objects have come within the vicinity of the Earth as comets, but the question has remained as to whether there are any objects in the asteroid belt that have migrated from further away where the D-type asteroids were formed during the early stages of the formation of the Solar System.

Research results
In the asteroid belt, asteroids with sizes over ~100 km in diameter are generally considered to have avoided catastrophic destruction and are thought to be the surviving population of the planetesimals that formed early in the formation of the Solar System. Our international research team therefore conducted a spectroscopic survey of asteroids with diameters of ~100 km or more in the asteroid belt to acquire near-infrared spectroscopic data for objects which have no previously obtained observational data in order to uncover the distribution the planetesimals and the composition of such objects during the formation of the asteroid belt.

In the spectroscopic survey, we discovered that 203 Pompeja, with a diameter of 110 km, has a spectrum redder than even that of the D-type asteroids (Figure 1). Furthermore, examination of past observations revealed that 269 Justitia, with a diameter of 55 km and whose very red spectrum had been previously recorded, has a redness similar to that of 203 Pompeja (Fig. 1).

Figure 1: 203 Pompeja and 269 Justitia spectra. Horizontal axis marks wavelength, while the vertical axis shows the reflectance intensity, normalised to that at a wavelength of 0.55 microns. Longer wavelengths have a higher intensity, which is said to be more “red”. If the intensity decreases with lengthening wavelength, the spectra is said to become more “blue”(adapted from Hasegawa et al. 2021).

Asteroids with a very red spectrum, such as 203 Pompeja and 269 Justitia, have not previously been found in the asteroid belt, Cybele, Hilda or Jupiter Trojan groups. But as we look at the outer edge of the Solar System, these distant celestial bodies and Centaurs are known to have similar or even redder spectra. The spectroscopic comparison revealed that 203 Pompeja and 269 Justitia share similar spectral characteristics with the outer Solar System celestial bodies and those of the Centaurs (Fig. 1).

Previous studies have pointed to the surfaces of the trans-Neptunian objects and Centaurs, which have a redder spectra than the D-type asteroids, being covered with complex organic mat
ter. These two objects in the asteroid belt may therefore also be covered with organic matter.

Scientific significance of this research

The surface of trans-Neptunian objects and Centaurs are covered with complex organics, which are thought to be produced from simple organic compounds such as methane and methanol ice.

The three snow lines related to this work are the water ice snow line, the carbon dioxide snow line and the organic compound snow line, and are located steadily further from the Sun in this order.

Combining the idea of the snow lines with the latest Solar System formation model, the following can be supposed:

D-type asteroids are formed in the inner region of the Solar System, compared to those asteroids that have a very red spectrum. As a result of planetary migration, a number of these D-type asteroids end up in the range between the asteroid belt and the Trojan group.

Asteroids with a very red spectra, which share an origin with outer Solar System bodies and the Centaurs, are formed further out than the D-type asteroids. They are therefore less numerous in the region between the asteroid belt and Trojan group. 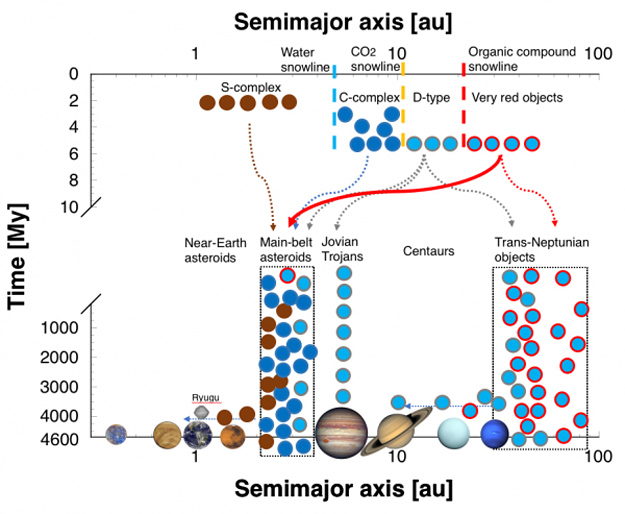 Asteroid 162173 Ryugu, from which Hayabusa2 returned a sample, is a C-type asteroid and thought to have formed outside the water ice snow line before moving to a position closer to the Earth (Fig. 2).

However, asteroids 203 Pompeja and 269 Justitia that were discovered here are thought to have been formed near the outer edge of the Solar System beyond the distant organic snow line and then moved to the asteroid belt during the early epoch of the Solar System’s formation (Fig. 2).

（※４）Snow line This is the location where water ice and carbon dioxide, which are usually liquids or gases on Earth, and organic compounds such as methanol and methane, become ice in outer space within the Solar System. On Earth, when the temperature drops on the ground, water changes phase as water vapour → liquid water → water ice, but in outer space, the phase order is water vapour → water ice, due to the low pressure.
The Solar System formed from a protoplanetary disc, in which the temperature decreases as you move away from the Sun. Since the temperature at which the change to solid occurs is lower going from water ice → carbon dioxide → organic compounds, the water ice snow line is closest to the Sun, the carbon dioxide snow line is next, and the snow line furthest from the Sun is the organic compounds snow line.

A Biocentric Tour Of The Periodic Table