NASA's Webb to Study Young Exoplanets on the Edge

Before planets around other stars were first discovered in the 1990s, these far-flung exotic worlds lived only in the imagination of science fiction writers.

But even their creative minds could not have conceived of the variety of worlds astronomers have uncovered. Many of these worlds, called exoplanets, are vastly different from our solar system’s family of planets. They range from star-hugging “hot Jupiters” to oversized rocky planets dubbed “super Earths.” Our universe apparently is stranger than fiction.

Seeing these distant worlds isn’t easy because they get lost in the glare of their host stars. Trying to detect them is like straining to see a firefly hovering next to a lighthouse’s brilliant beacon.

That’s why astronomers have identified most of the more than 4,000 exoplanets found so far using indirect techniques, such as through a star’s slight wobble or its unexpected dimming as a planet passes in front of it, blocking some of the starlight.

These techniques work best, however, for planets orbiting close to their stars, where astronomers can detect changes over weeks or even days as the planet completes its racetrack orbit. But finding only star-skimming planets doesn’t provide astronomers with a comprehensive picture of all the possible worlds in star systems.

Another technique researchers use in the hunt for exoplanets, which are planets orbiting other stars, is one that focuses on planets that are farther away from a star’s blinding glare. Scientists have uncovered young exoplanets that are so hot they glow in infrared light using specialized imaging techniques that block out the glare from the star. In this way, some exoplanets can be directly seen and studied.

NASA’s upcoming James Webb Space Telescope will help astronomers probe farther into this bold new frontier. Webb, like some ground-based telescopes, is equipped with special optical systems called coronagraphs, which use masks designed to block out as much starlight as possible to study faint exoplanets and to uncover new worlds. 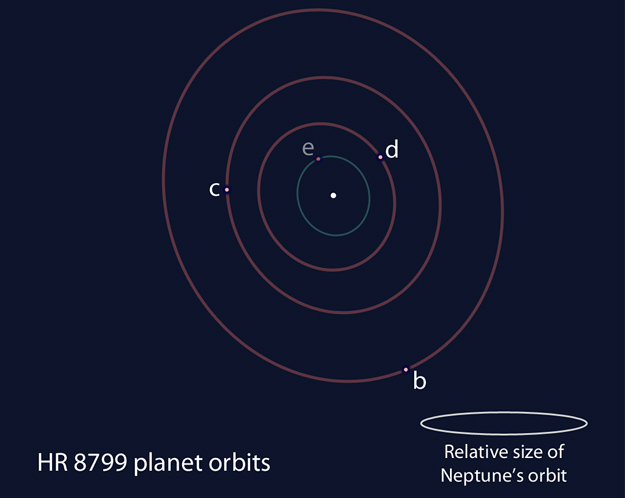 This schematic shows the positions of the four exoplanets orbiting far away from the nearby star HR 8799. The orbits appear elongated because of a slight tilt of the plane of the orbits relative to our line of sight. The size of the HR 8799 planetary system is comparable to our solar system, as indicated by the orbit of Neptune, shown to scale. Credits: NASA, ESA, and R. Soummer (STScI)

Two targets early in Webb’s mission are the planetary systems 51 Eridani and HR 8799. Out of the few dozen directly imaged planets, astronomers plan to use Webb to analyze in detail the systems that are closest to Earth and have planets at the widest separations from their stars. This means that they appear far enough away from a star’s glare to be directly observed. The HR 8799 system resides 133 light-years and 51 Eridani 96 light-years from Earth.

Two observing programs early in Webb’s mission combine the spectroscopic capabilities of the Near Infrared Spectrograph (NIRSpec) and the imaging of the Near Infrared Camera (NIRCam) and Mid-Infrared Instrument (MIRI) to study the four giant planets in the HR 8799 system. In a third program, researchers will use NIRCam to analyze the giant planet in 51 Eridani.

The four giant planets in the HR 8799 system are each roughly 10 Jupiter masses. They orbit more than 14 billion miles from a star that is slightly more massive than the Sun. The giant planet in 51 Eridani is twice the mass of Jupiter and orbits about 11 billion miles from a Sun-like star. Both planetary systems have orbits oriented face-on toward Earth. This orientation gives astronomers a unique opportunity to get a bird’s-eye view down on top of the systems, like looking at the concentric rings on an archery target.

Many exoplanets found in the outer orbits of their stars are vastly different from our solar system planets. Most of the exoplanets discovered in this outer region, including those in HR 8799, are between 5 and 10 Jupiter masses, making them the most massive planets ever found to date.

These outer exoplanets are relatively young, from tens of millions to hundreds of millions of years old–much younger than our solar system’s 4.5 billion years. So they’re still glowing with heat from their formation. The images of these exoplanets are essentially baby pictures, revealing planets in their youth.

Webb will probe into the mid-infrared, a wavelength range astronomers have rarely used before to image distant worlds. This infrared “window” is difficult to observe from the ground because of thermal emission from and absorption in Earth’s atmosphere.

“Webb’s strong point is the uninhibited light coming through space in the mid-infrared range,” said Klaus Hodapp of the University of Hawaii in Hilo, lead investigator of the NIRSpec observations of the HR 8799 system. “Earth’s atmosphere is pretty difficult to work through. The major absorption molecules in our own atmosphere prevent us from seeing interesting features in planets.” 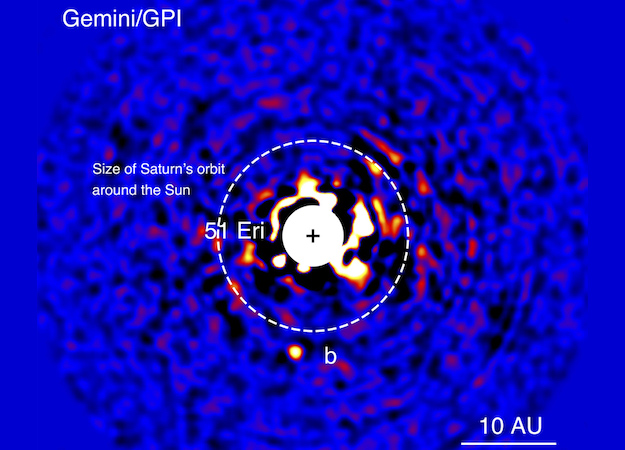 This discovery image of a Jupiter-sized extrasolar planet orbiting the nearby star 51 Eridani was taken in near-infrared light in 2014 by the Gemini Planet Imager. The bright central star is hidden behind a mask in the center of the image to enable the detection of the exoplanet, which is 1 million times fainter than 51 Eridani. The exoplanet is on the outskirts of the planetary system 11 billion miles from its star. Webb will probe the planet’s atmosphere at infrared wavelengths astronomers have rarely used to image distant worlds. Credits: International Gemini Observatory/NOIRLab/NSF/AURA, J. Rameau (University of Montreal), and C. Marois (National Research Council of Canada Herzberg)

The mid-infrared “is the region where Webb really will make seminal contributions to understanding what are the particular molecules, what are the properties of the atmosphere that we hope to find which we don’t really get just from the shorter, near-infrared wavelengths,” said Charles Beichman of NASA’s Jet Propulsion Laboratory in Pasadena, California, lead investigator of the NIRCam and MIRI observations of the HR 8799 system. “We’ll build on what the ground-based observatories have done, but the goal is to expand on that in a way that would be impossible without Webb.”

How Do Planets Form?

One of the researchers’ main goals in both systems is to use Webb to help determine how the exoplanets formed. Were they created through a buildup of material in the disk surrounding the star, enriched in heavy elements such as carbon, just as Jupiter probably did? Or, did they form from the collapse of a hydrogen cloud, like a star, and become smaller under the relentless pull of gravity?

Atmospheric makeup can provide clues to a planet’s birth. “One of the things we’d like to understand is the ratio of the elements that have gone into the formation of these planets,” Beichman said. “In particular, carbon versus oxygen tells you quite a lot about where the gas that formed the planet comes from. Did it come from a disk that accreted a lot of the heavier elements or did it come from the interstellar medium? So it’s what we call the carbon-to-oxygen ratio that is quite indicative of formation mechanisms.”

To answer these questions, the researchers will use Webb to probe deeper into the exoplanets’ atmospheres. NIRCam, for example, will measure the atmospheric fingerprints of elements like methane. It also will look at cloud features and the temperatures of these planets
. “We already have a lot of information at these near-infrared wavelengths from ground-based facilities,” said Marshall Perrin of the Space Telescope Science Institute in Baltimore, Maryland, lead investigator of NIRCam observations of 51 Eridani b. “But the data from Webb will be much more precise, much more sensitive. We’ll have a more complete set of wavelengths, including filling in gaps where you can’t get those wavelengths from the ground.”

This video shows four Jupiter-sized exoplanets orbiting billions of miles away from their star in the nearby HR 8799 system. The planetary system is oriented face-on toward Earth, giving astronomers a unique bird’s-eye view of the planets’ motion. The exoplanets are orbiting so far away from their star that they take anywhere from decades to centuries to complete an orbit. The video consists of seven images of the system taken over a seven-year period with the W.M. Keck Observatory on Mauna Kea, Hawaii. Keck’s coronagraph blocks out most of the starlight so that the much fainter and smaller exoplanets can be seen. Credits: Jason Wang (Caltech) and Christian Marois (NRC Herzberg)

The astronomers will also use Webb and its superb sensitivity to hunt for less-massive planets far from their star. “From ground-based observations, we know that these massive planets are relatively rare,” Perrin said. “But we also know that for the inner parts of systems, lower-mass planets are dramatically more common than larger-mass planets. So the question is, does it also hold true for these further separations out?” Beichman added, “Webb’s operation in the cold environment of space allows a search for fainter, smaller planets, impossible to detect from the ground.”

Another goal is understanding how the myriad planetary systems discovered so far were created.

This video shows a Jupiter-sized exoplanet orbiting far away–roughly 11 billion miles–from a nearby, Sun-like star, 51 Eridani. The planetary system is oriented face-on toward Earth, giving astronomers a unique bird’s-eye view of the planet’s motion. The video consists of five images taken over four years with the Gemini South Telescope’s Gemini Planet Imager, in Chile. Gemini’s coronagraph blocks out most of the starlight so that the much fainter and smaller exoplanet can be seen. Credits: Jason Wang (Caltech)/Gemini Planet Imager Exoplanet Survey

The James Webb Space Telescope will be the world’s premier space science observatory when it launches in 2021. Webb will solve mysteries in our solar system, look beyond to distant worlds around other stars, and probe the mysterious structures and origins of our universe and our place in it. Webb is an international program led by NASA with its partners, ESA (European Space Agency) and the Canadian Space Agency.