By Keith Cowing
Europlanet
May 28, 2019
Filed under extremophile

The first study of ultra-small bacteria living in the extreme environment of Ethiopia’s Dallol hot springs shows that life can thrive in conditions similar to those thought to have been found on the young planet Mars.

An international team of researchers lead by Dr Felipe Gómez from Astrobiology Center in Spain (CAB (CSIC-INTA)) has found a strain of the Nanohaloarchaeles Order bacteria embedded in samples taken from a salt chimney deposited by supersaturated water at temperatures of 89 degrees Celsius and at the extremely acidic pH of 0.25.

The samples were collected during a field trip to the Dallol volcano and the Danakil Depression in northern Ethiopia in January 2017, which was funded by the Europlanet 2020 Research Infrastructure (RI). The results are published today in the journal, Scientific Reports.

“This is an exotic, multi-extreme environment, with organisms that need to love high temperature, high salt content and very low pH in order to survive,” said Dr Gómez.

Precipitation by superheated water saturated with various salts, including silver chloride, zinc iron sulphide, manganese dioxide and normal rock-salt, creates Dallol’s technicoloured landscape of yellows, reds, greens and blues. The team collected samples of the thin layers of salt deposits from the wall of a yellow chimney stack and a blue pool of water surrounding the outcrop.

The samples were transported in sterile, sealed vials to state-of-the-art facilities in Spain, where they were analysed using a range of techniques, including electron microscopy, chemical analysis and DNA sequencing. The team identified tiny, spherical structures within the salt samples that had a high carbon content, demonstrating an unambiguously biological origin.

The microorganisms are 50-500 nanometers in diameter — up to 20 times smaller than the average bacteria. In several cases, the microorganisms are surrounded by needle-shaped crystals, which suggests that the nanobacteria may play an active role in the salt deposits and the geochemical cycle at Dallol.

The Dallol volcano and geothermal area is one of the hottest places on Earth, with average annual temperatures of 36 to 38 degrees Celsius. It is located at the northern end of the Danakil Depression, which lies around 125m below sea level at the junction of three of the Earth’s lithospheric plates (Arabian, Nubian and Somalian) that are moving apart. Hydrothermal activity is fuelled by water that has been heated and enriched in gases by a shallow magma reservoir beneath the volcano. Dallol is surrounded by the wide Assale salt plain. The interaction between evaporated deposits and volcanism creates a unique and complex physical and chemical environment.

The unusual geochemistry of Dallol has close parallels to hydrothermal environments found on Mars, including the Gusev Crater, where NASA’s Spirit Mars Exploration Rover landed. Last month, the same international team published a review in the journal, Astrobiology, highlighting the importance of Dallol as a field analogue for Mars and for astrobiological studies. The paper is the culmination of a two-year process supported by Europlanet 2020 RI to characterise the Dallol site’s geology, mineralogy and biology in preparation for further study by planetary researchers.

“Deep investigation of the characteristics of this amazing site will improve our understanding of the limits of life on Earth an inform our search for life on Mars and elsewhere in the Universe,” said Barbara Cavalazzi of the University of Bologna, lead author of the review. 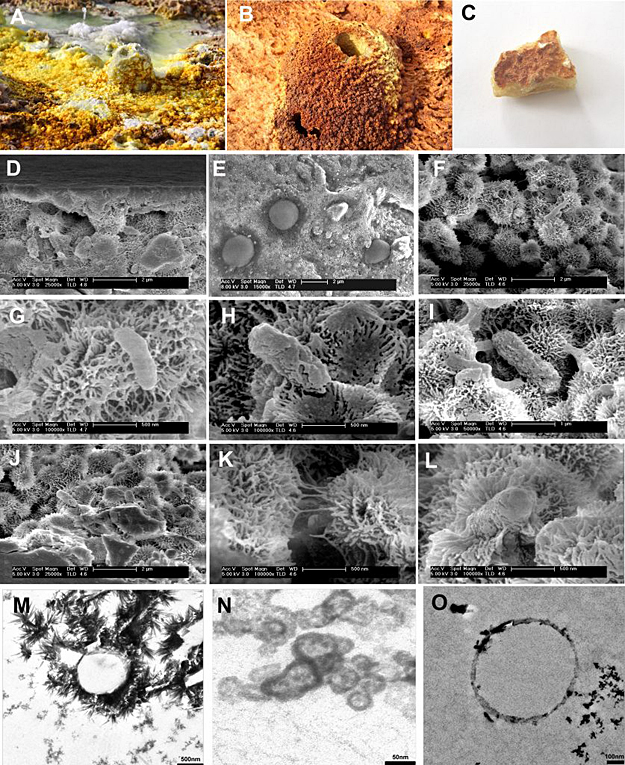 The sampling site. Samples were taken from the central yellow outcrop and water from the blue pool at the bottom of the chimney. Credit: Felipe Gomez/Europlanet

Since 2005, Europlanet has provided Europe’s planetary science community with a platform to exchange ideas and personnel, share research tools, data and facilities, define key science goals for the future, and engage stakeholders, policy makers and European citizens with planetary science.

The Europlanet 2020 Research Infrastructure (RI) has received funding from the European Union’s Horizon 2020 research and innovation programme under grant agreement No 654208 to provide access to state-of-the-art research facilities across the European Research Area and a mechanism to coordinate Europe’s planetary science community. The project builds on a €2 million Framework 6 Coordination Action and €6 million Framework 7 Research Infrastructure funded by the European Commission. The Europlanet Society, launched in September 2018, promotes the advancement of planetary science and related fields in Europe.