On Europa Chaos Terrains Could Be Shuttling Oxygen To An Ocean

Salt water within the icy shell of Jupiter’s moon Europa could be transporting oxygen into an ice-covered ocean of liquid water where it could potentially help sustain alien life, according to a team of researchers led by The University of Texas at Austin.

This theory has been proposed by others, but the researchers put it to the test by building the world’s first physics-based computer simulation of the process, with oxygen hitching a ride on salt water under the moon’s “chaos terrains,” landscapes made up of cracks, ridges and ice blocks that cover a quarter of the icy world.

The results show that not only is the transport possible, but that the amount of oxygen brought into Europa’s ocean could be on a par with the quantity of oxygen in Earth’s oceans today.

“Our research puts this process into the realm of the possible,” said lead researcher Marc Hesse, a professor at the UT Jackson School of Geosciences Department of Geological Sciences. “It provides a solution to what is considered one of the outstanding problems of the habitability of the Europa subsurface ocean.”

The study was recently published in the journal Geophysical Research Letters. 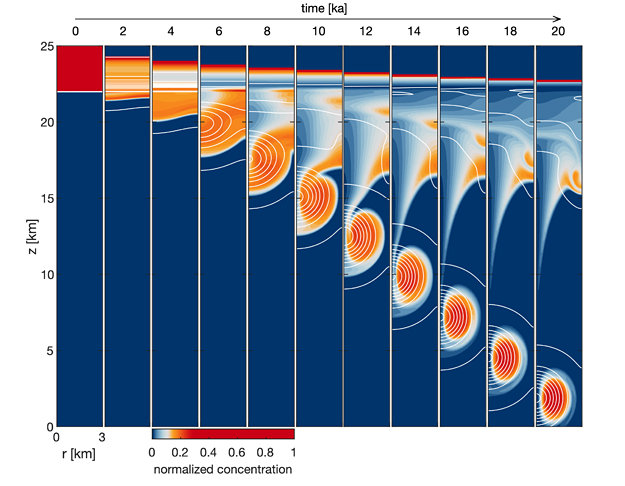 The physics-based model built by the researchers shows brine and oxygen at Europa’s surface being carried by a “porosity wave” (spherical shape) through the moon’s ice shell to the liquid water ocean below. The chart shows time (in thousands of years) and ice shell depth (in kilometers). Red indicates higher levels of oxygen. Blue represents lower levels of oxygen. CREDIT Hesse et al.

Europa is a top spot to look for alien life because scientists have detected signs of oxygen and water, along with chemicals that could serve as nutrients. However, the moon’s ice shell – which is estimated to be about 15 miles thick – serves as a barrier between water and oxygen, which is generated by sunlight and charged particles from Jupiter striking the icy surface.

If life as we know it exists in the ocean, there needs to be a way for oxygen to get to it. According to Hesse, the most plausible scenario based on the available evidence is for the oxygen to be carried by salt water, or brine.

Scientists think that chaos terrains form above regions where Europa’s ice shell partially melts to form brine, which can mix with oxygen from the surface. The computer model created by the researchers showed what happens to the brine after the formation of the chaos terrain.

The model showed the brine draining in a distinct manner, taking the form of a “porosity wave” that causes pores in the ice to momentarily widen – allowing the brine to pass through before sealing back up. Hesse compares the process to the classic cartoon gag of a bulge of water making its way down a garden hose.

This mode of transport appears to be an effective way to bring oxygen through the ice, with 86% of the oxygen taken up at the surface riding the wave all the way to the ocean. But the available data allows for a wide range of oxygen levels delivered to Europa’s ocean over its history – with estimates ranging by a factor of 10,000.

According to co-author Steven Vance, a research scientist at NASA’s Jet Propulsion Laboratory (JPL) and the supervisor of its Planetary Interiors and Geophysics Group, the highest estimate would make the oxygen levels in Europa’s ocean similar to those in Earth’s oceans – which raises hope about the potential for that oxygen to support life in the hidden sea.

“It’s enticing to think of some kind of aerobic organisms living just under the ice,” he said.

Vance said that NASA’s upcoming 2024 Europa Clipper mission may help improve estimates for oxygen and other ingredients for life on the icy moon.

Kevin Hand, a scientist focused on Europa research at NASA JPL who was not part of the study, said that the study presents a compelling explanation for oxygen transport on Europa.

“We know that Europa has useful compounds like oxygen on its surface, but do those make it down into the ocean below, where life can use them?” he said. “In the work by Hesse and his collaborators, the answer seems to be yes.”

The research was funded by NASA, the National Science Foundation and the American Chemical Society Petroleum Research Fund.

In addition to the Jackson School, Hesse is also a researcher at the UT Center for Planetary Systems Habitability and the Oden Institute for Computational Engineering and Sciences.