DAVINCI will send a meter-diameter probe to brave the high temperatures and pressures near Venus’ surface to explore the atmosphere from above the clouds to near the surface of a terrain that may have been a past continent.

Short for Venus Mass Spectrometer, VMS is one of five instruments aboard the DAVINCI descent probe. Launching in 2029, DAVINCI will be the first US probe mission to enter Venus’ atmosphere in over 40 years. The goal of the mission is to explore Venus to determine if it was habitable, and to understand how it ended up as inhospitable as it did.

The probe will descend for around one hour through the Venus atmosphere, making chemistry, temperature, pressure, and wind measurements as well as infrared imaging before landing on the surface of the planet. The job of VMS is to ingest gas during the probe’s descent, analyze it, and provide us with information about the chemical composition of the Venusian atmosphere and possible connections to surface mineralogies.

The subsystems within VMS allow us to perform complex chemistry experiments in a very small package, which is “essentially like sending a complex chemistry lab squished down to the size of a briefcase,” says Charles A. Malespin, Chief of the Planetary Environments Lab at NASA’s Goddard Space Flight Center in Greenbelt, Maryland, and Payload Element Lead for VMS.

“VMS will provide unprecedented measurements of the atmospheric composition of Venus,” says Malespin. “Not only will we be able to determine the major gas abundances, we will be scanning in a ‘discovery mode’ where we can measure other gases that may be present in very low concentrations.” VMS will measure noble gases such as helium, neon, argon, krypton, and xenon. Noble gases are inert, odorless, and colorless gases that are unusual because they do not react with many other elements, and since these are stable over the long term can be informative about processes that happened long ago.

Comparing Venus’ noble gas measurements with noble gas ratios on other planets in the solar system can help find key pieces of information to answer questions about how Venus formed and how it evolved so differently from Earth: Did Venus form the same way as Earth? Did Venus ever have oceans? If so, when did they evaporate? Why did Venus become so hot? When did Venus become so hot? 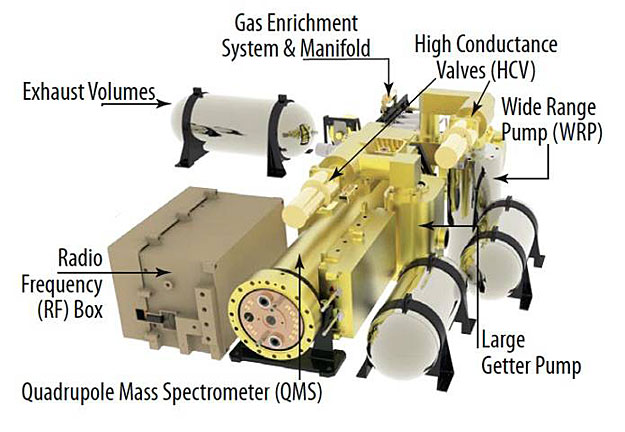 This drawing shows the components of the Venus Mass Spectrometer (VMS) instrument to be installed in the atmospheric probe on the DAVINCI mission to Venus. The job of VMS is to sample gas during the probe’s descent, analyze it, and provide us with information about the chemical composition of the Venusian atmosphere and possible connections to surface mineralogies. Credits: NASA

Gas inlets in the VMS system collect gases from the atmosphere. Some gases will be directly analyzed with a VMS component called the “Quadrupole Mass Spectrometer” (QMS), which is the “nose” of the instrument. It sniffs a small portion of the ingested gas and separates the gas into its individual components. The QMS acts as a mass filter, allowing each molecule to be sorted and providing abundance and isotope information (isotopes are forms of the same element with different masses).

For gases that are in concentrations lower than the detection limits of the QMS, such as the heavier noble gases krypton and xenon, the gas is chemically ‘enriched’ by another component of VMS called the Gas Processing System (GPS), using a series of chemical scrubbers and getters, which remove the higher abundance species and leave behind the lower abundance species for collection on a ‘cold trap’. This cold trap freezes out the gas that is not scrubbed, effectively enriching the amount of gas that can be analyzed. VMS then sends all the collected enriched gas from the cold trap to the QMS for analysis.

VMS builds on technology from instruments that have been used on previous missions by NASA. “Leveraging technology, techniques, and experience from previous missions is invaluable when you are going to a new location,” says Malespin, who also serves as deputy principal investigator on the Sample Analysis at Mars (SAM) instrument onboard the Curiosity rover on Mars.

“There are many lessons learned in the development and operation of a planetary mission, and having the experience to not repeat mistakes, and improve on previous lessons is something that makes your mission better.” VMS is going to use the exact same QMS as SAM uses, and a very similar GPS. “While Venus and Mars are quite different, our experience with SAM will hopefully allow us to work more efficiently and leverage the lessons learned while we build and prepare VMS for the DAVINCI mission,” says Malespin.

The sampling subsystems within VMS will have to be adjusted to function in Venus’ highly inhospitable atmosphere, with sulfuric acid clouds and surface temperatures hot enough to melt lead. “There are changes that need to be made to ensure that key aspects of the instrument can successfully operate and complete the science goals in the new environment,” explains Malespin.

These changes include adding heated inlets with filters, which will protect the inlet from clogging and corrosion as it ingests the destructive gases and cloud particles in Venus’ atmosphere. “There are spots (in the atmosphere) where the more corrosive gases would form droplets and collect on the inlet, possibly clogging it. The heated inlet would vaporize those droplets and allow the inlet to remain free of any clogs,” says Malespin.

Along with VMS, the DAVINCI probe will host the Venus Tunable Laser Spectrometer (VTLS), Venus Atmospheric Structure Investigation (VASI), and Venus Descent Imager (VenDI). All of these instruments will be inside the climate-controlled descent sphere, which will protect them from the extreme temperatures and atmospheric pressure – over 90 times that of Earth’s atmosphere at the surface – during descent in the deepest atmosphere. In addition, a student collaboration experiment will fly (VfOx) to measure the partial pressure of oxygen in the deep atmosphere directly.

More about the mission and partners:

VMS is being built at NASA’s Goddard Space Flight Center in Greenbelt, Maryland. However, there are several technical partners who are contributing key components of the instrument. The main electronics box will be provided by the Space Physics Research Lab (SPRL) at the University of Michigan. The Wide Range Pump (WRP), which is used to keep the mass spectrometer at high vacuum, will be provided by Creare out of Hanover, New Hampshire. NASA Goddard has partnered with both companies on previous missions involving mass spectrometers, including SAM onboard the Curiosity rover at Mars.

NASA Goddard is the principal investigator institution for DAVINCI and will perform project management for the mission, as well as project systems engineering to develop the probe flight system. Goddard also leads the project science support team. Discovery-Program-class missions like DAVINCI complement NASA’s larger “flagship” planetary science explorations, with the goal of achieving outstanding results by launching more smaller missions using fewer resources and shorter development times. They are managed for NASA’s Planetary Science Division by the Planetary Missions Program Office at Marshall Space Flight Center in Huntsville, Alabama. The missions are designed and led by a principal investigator (for DAVINCI: J. B. Garvin of NASA Goddard), who assembles a team of scientists and engineers to address key science questions about the solar system.

Atmospheric Retrievals For LIFE And Other Future Space Missions: The Importance Of Mitigating Systematic Effects