Europa: A World of Ice, With Potential for Life – NASA's Europa Clipper

Jupiter’s icy moon Europa may be the most promising place in the solar system to find present-day environments suitable for life beyond Earth.

Scientists study the origin, evolution, distribution, and future of life in the universe in a scientific field called astrobiology. They’ve found that life as we know it requires three main ingredients: temperatures that allow liquid water to exist; the presence of carbon-based molecules; and an energy input, such as sunlight.

Europa seems to have all three ingredients. But to understand why it’s a uniquely captivating target for astrobiology, it helps to know a bit about a few other moons and planets in the solar system. The story starts with water.

Almost everywhere we find water on Earth, we also find life. So water’s presence or absence is an initial way to assess a world’s habitability. As it happens, Earth’s planetary neighbors may have once been wetter.

For as long as 2 billion years, liquid water may have covered much of the surface of Venus. But today Venus is a hellscape. The planet’s atmospheric pressure would crush a human, and temperatures reach 864 degrees Fahrenheit (462 degrees Celsius). Even if evidence for life were sitting on the planet’s surface, searching for it would be challenging. The planet’s climate is nearly as damaging to robotic probes as it would be to humans. 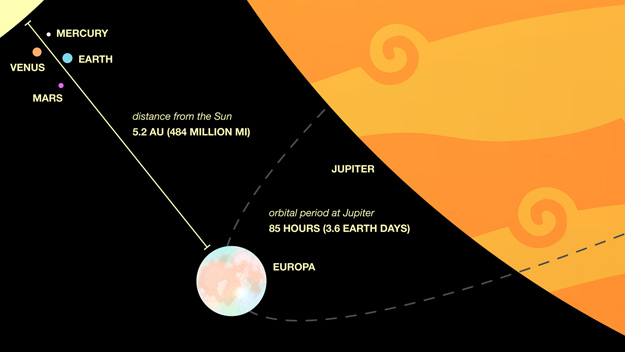 Mars is more merciful. Landing on Mars is notoriously difficult. But Mars offers a more tolerable environment than Venus for any plucky probes that reach the Martian surface intact. Generations of rovers and landers have taught us much about the Red Planet. A few billion years ago, an ocean may have covered one-fifth of the Martian surface. Indeed, scientists think Mars was once habitable. Then, over millions of years, Mars lost most of the water that was on its surface. Solar wind and radiation stripped away the Martian atmosphere. An ocean world that could have supported life is now a frigid, nearly airless desert.

But more exotic worlds farther from the Sun host vast oceans in the present day. Europa is one of those worlds.

It Matters Where We Find Life

Around most stars is a region where conditions are just right for an orbiting planet to have liquid water on its surface. That region is the star’s habitable zone or “Goldilocks zone.” But scientists have learned that worlds outside the Goldilocks zone can have liquid oceans as well, including several moons in our outer solar system.

Some moons of Saturn and Jupiter (including Europa, we suspect) are ocean worlds – they have oceans beneath their icy surfaces. In fact, finding life in one of these oceans might be more consequential than finding life on Mars. It could change how humans understand the equation for life in the cosmos. 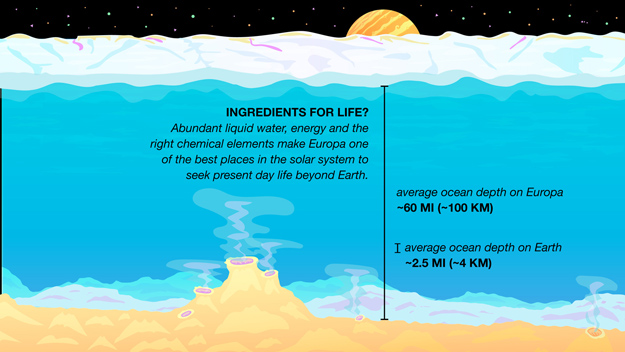 In theory, even simple lifeforms can travel from one planet to another. A meteorite collides with a planet and ejects surface material containing microbes. The rocky chunks float through space until some collide with another planet. Life then springs forth on a new world.

If life existed on Earth and Mars, it didn’t necessarily start on both worlds. Instead, life may have evolved on one of the two planets, then traveled to the other. We know the two planets swap rocks because Mars rocks have been found on Earth.

The outer solar system is another story. Planets are far more spread out, making rock-swapping more challenging. For example, the orbits of Mars and Earth are about 34 million miles (54.6 million kilometers) apart. But the orbit of Jupiter, the next planet beyond Mars, is about three times farther away.

If life exists in Europa, it likely evolved entirely separate from life on Earth. And if life sprung forth separately on two worlds around the same star, humans could infer that life begins often and easily when the conditions are right. We could further reason that life is likely to be found throughout the cosmos.

The outer solar system contains several ocean worlds. Among them are two of Europa’s neighbors.

Scientists think Jupiter’s moons Ganymede and Callisto have oceans, sandwiched between layers of ice. High-energy particles around Jupiter generate chemical compounds on the moons’ surfaces that living things might find useful. But the outer ice shell of both moons is probably 100 miles (150 kilometers) thick. And neither moon shows signs of geologic activity that might transport those compounds to their oceans. Ganymede and Callisto also may have a seafloor layer of ice, preventing chemical nutrients from entering the moons’ oceans from the rocky mantle below.

Europa’s ocean, however, is close to its surface. Its ice shell is probably 10 to 15 miles (15 to 25 kilometers) thick, on average. Europa also seems likely to have present-day geologic activity that might transport surface compounds to its ocean. 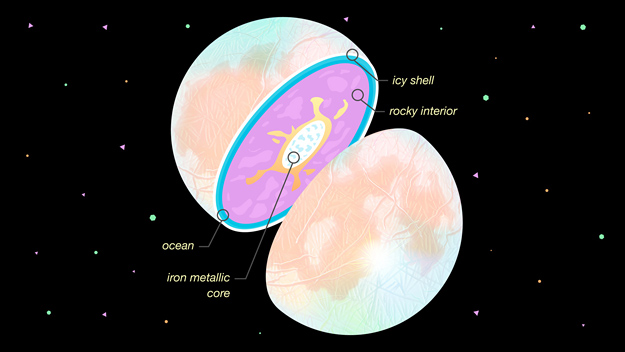 In contrast to Ganymede and Callisto, Europa’s ocean is also probably in direct contact with warm rock at the seafloor. That interaction could supply hydrogen and other chemicals to the ocean. While the energy input for life on Earth comes primarily from the Sun, Europa’s energy input might come from surface chemistry and water-rock interactions on the seafloor.

Ocean worlds are found even farther from the Sun than Jupiter. At least one such world orbits Saturn, nearly twice as far from the Sun as Jupiter. Tiny Enceladus has a global saltwater ocean that sprays into space as a plume of icy particles. And enormous Titan may have a subsurface water ocean of its own. NASA has approved development of a Titan mission called Dragonfly. A rotocraft will fly in Titan’s dense atmosphere, seeking prebiotic chemical processes. Scientists have also begun proposing concepts for an Enceladus mission.

But Europa has already been studied by six spacecraft, starting about 50 years ago. Pioneer 10 and 11, Voyager 1 and 2, and the Galileo spacecraft visited the Jupiter system. The Hubble Space Telescope has also observed Europa from Earth orbit.

Additionally, the Juno spacecraft, orbiting Jupiter since 2016, will also provide insights about Europa. NASA extended the Juno mission beyond its prime mission (ending in July 2021) to continue operation through September 2025, or until the spacecraft’s end of life. The extension lets Juno explore beyond its primary science target, Jupiter, to the planet’s rings and moons. Juno now has multiple planned rendezvous with Europa, as well as Ganymede and Io.

Pioneer 10 kicked things off. The spacecraft flew by Jupiter in 1973 and performed the first survey of the planet and its moons. In 1979, Voyager 2 captured the first close images of Europa, to reveal ridges and cracks on the moon’s surface. It also showed us that Europa might be geologically active today. 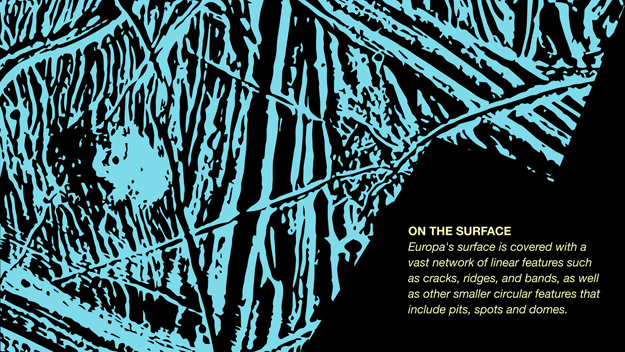 From 1995 to 2003, the Galileo spacecraft orbited Jupiter and studied the Jovian system. Galileo made 12 close passes of Europa and provided more detailed views of the icy moon. It also found the best evidence for a Europan ocean: an “induced magnetic field” that strongly suggested a s
alty water layer under the ice.

In 2012 the Hubble Space Telescope observed intriguing evidence that plumes of water vapor might be erupting from Europa. In 2018, scientists revisited Galileo data and found further evidence for plumes there.

Does Europa really contain a liquid water ocean? What are the ocean’s depth, temperatures, saltiness, acidity, and other chemistry? Do compounds useful to microbes make their way from the moon’s surface and rocky mantle into the ocean? If Europa’s ocean is erupting into space as plumes, what can sampling the plumes reveal about its composition?

Answering those questions might guide us toward answering the real question – the BIG question.

As yet, we have no evidence for life at Europa, but…

Between 50 and 80 percent of life on Earth is in the ocean. Not only plants, coral, fish, and mammals, but also extremophiles — organisms that survive in extreme environments. They live in freezing realms below arctic sea ice and in the boiling temperatures and crushing pressures around deep-sea hydrothermal vents.

Earth’s oldest fossils are 3.5 billions years old. That means life got a foothold on our planet soon after conditions allowed it to survive. And Europa’s ocean may have existed for billions of years.

Given what we know about the ingredients for life, how quickly life sprung forth on Earth once conditions allowed it, and that life finds ways to survive in extreme environments, Europa is the premiere place to seek life beyond Earth.

Whispers From The Deep Sea: The Subtle Sounds Of Hydrothermal Vents
Categories