While the expression of some genes does not change in the space environment, some are turned on to a greater extent and others to a lesser extent. Understanding why this happens has great implications for both long-duration space missions and achieving a better understanding of the basic mechanisms at work within life on Earth. For example, some of the genes with altered responses in spaceflight trigger plant defense responses on Earth that are normally activated by pathogens and herbivores.

NASA’s Kennedy Space Center Payload Development team has developed a single-locker-sized instrument (Spectrum) that facilitates the evaluation of these phenomena (and others) in an automated fashion and requires minimal crew time.

Spectrum is a multi-spectral fluorescence imaging system designed for capturing in vivo (i.e., within a living organism) gene expression in the low- to zero-gravity environment of the International Space Station (ISS). To enable the detection of gene expression, DNA segments encoding fluorescent proteins are inserted into the organism’s genome next to the genes of interest, so that when these genes are activated, the fluorescent proteins are produced as well. The detection and monitoring of these fluorescent proteins will allow the scientific community to further understand biological responses of these organisms when subjected to space environments.

Spectrum resides within an EXpedite the PRocessing of Experiments for Space Station (EXPRESS) rack, which provides power, data, and other elements needed to run science experiments on the ISS.

To hold the biological samples that will be observed, Spectrum accommodates standard 100 mm x 100 mm Petri plates, 128 mm x 82 mm multi-well culture plates, and other custom containers within its growth and imaging chamber. Principal Investigators (PIs) can specify automated management of chamber properties and the collection of chamber environment information, including near real-time 71-megapixel images of fluorescent emission from biological organisms under highly uniform illumination.

PIs can control the Spectrum chamber temperature (18-37° C), relative humidity (RH), carbon dioxide concentrations (ranging between 400 ppm up to ISS-ambient levels), and growth light characteristics. Spectrum can also remove volatile organic compounds (including ethylene down to 25 ppb) from the environment. The Spectrum software is completely controlled via ground commanding and PIs can modify the Spectrum conditions during experiments. In a typical experiment, an astronaut loads an experimental plate with the organisms to be studied into the Spectrum unit; the system runs automatically controlling temperature and changing the lights according to a desired program; and the camera takes pictures as programmed (e.g., hourly).

Researchers can image up to five genes at a time using a variety of fluorescent proteins that indicate genes of interest, and excitation light and emission filters that are easily replaceable on-orbit by the crew. Spectrum is also equipped with chlorophyll fluorescence imaging to monitor plant health during experiments.

Spectrum’s filter wheel can hold ten emission filters and rapidly switch between them. The Excitation Light Source (ELS) uses diffusers to achieve an 80% uniform illumination of the plates containing the biological samples. Additional filters are provided to support color and infrared images. This ability to switch between emission filters allows researchers to image several fluorescent proteins in a single specimen.

Four specimen plates can be mounted and rotated for sequential imaging. Chamber air is ducted through the carousel to suppress condensation on the inside of Petri plate covers. The carousel is capable of continuous rotation up to 33 rpm and is removable to allow future modification for partial gravity exposures on-orbit. 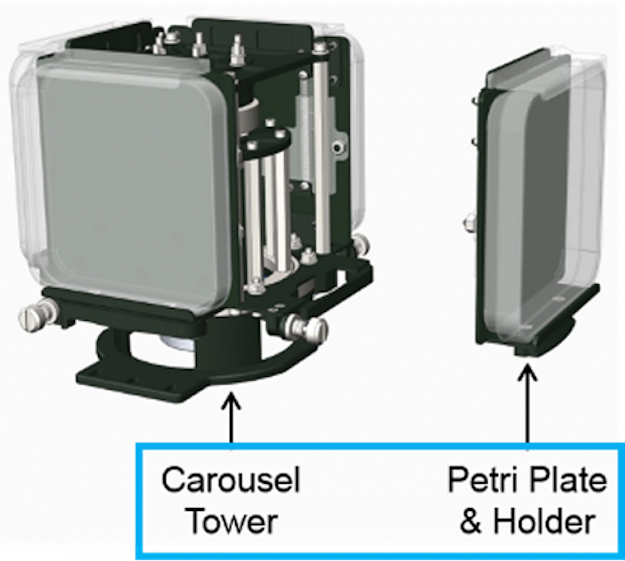 Spectrum’s Carousel (left) and one of four plate holders (right) removed for insertion or replacement.

Spectrum is commanded from the ground and internally collects and stores time-stamped images with the option to downlink images and chamber environmental data for near-real time evaluation by the investigator team. To accommodate new science requirements, PIs may consider modifications to certain Spectrum components including the ELS, the Emission Filters, camera lenses, chamber sensors, carousel assemblies, and the Air Filter Cartridge. Spectrum software can also be modified during flight.

Spectrum is now available for experiments on ISS, creating a new capability for multiple types of investigations that will further NASA’s goals relating to understanding the effects of spaceflight on biological organisms.

Extremeophiles and Extreme Environments
Uncovering The Secrets Of Electron-eating Microorganisms

Uncovering The Secrets Of Electron-eating Microorganisms