These particles, which are biological in origin, can affect weather patterns throughout the world, according to the new study in the AGU journal Geophysical Research Letters.

Particles suspended in air called aerosols can sometimes accelerate ice crystal formation in clouds, impacting weather climate and weather patterns. Such ice-nucleating particles include dust, smoke, pollen, fungi and bacteria. Previous research had shown marine bacteria were seeding clouds in the Arctic, but how they got from the ocean to the clouds was a mystery.

In the new study, the researchers took samples of water and air in the Bering Strait, and tested the samples for the presence of biological ice nucleating particles. Bacteria normally found near the sea floor was present in the air above the ocean surface, suggesting ocean currents and turmoil help make the bacteria airborne.

Oceanic currents and weather systems brought bacteria feeding off algae blooms to the sea spray above the ocean’s surface, helping to seed clouds in the atmosphere, according to the new research.

“These special types of aerosols can actually ‘seed’ clouds, kind of similar to how a seed would grow a plant. Some of these seeds are really efficient at forming cloud ice crystals,” said Jessie Creamean, an atmospheric scientist at Colorado State University in Fort Collins, Colorado, and lead author on the new study. 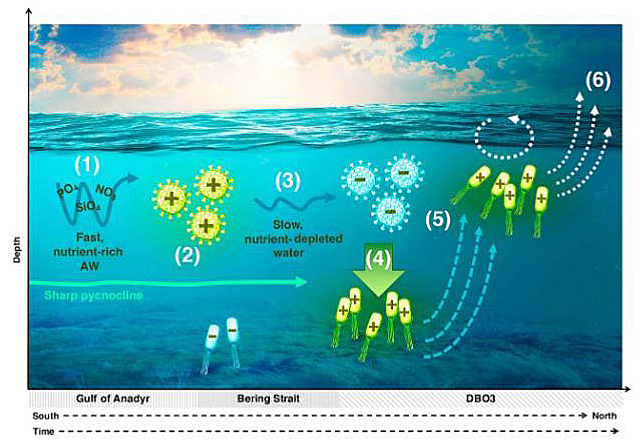 This model shows how cloud seeds may interact with a phytoplankton bloom and weather events, eventually rising to the atmosphere.

Pure water droplets in clouds don’t freeze until roughly minus 40 degrees Celsius (minus 40 degrees Fahrenheit). They are supercooled below their freezing point but still liquid. Aerosols raise the base freezing temperature in supercooled clouds to minus five degrees Celsius (23 degrees Fahrenheit), by providing a surface for water to crystalize on, and creating clouds mixed with supercooled droplets and ice crystals. Mixed clouds are the most common type of clouds on the planet and the best for producing rain or snow.

“Cloud seeds,” like the bacteria found in algae blooms, can create more clouds with varying amounts of ice and water. An increase in clouds can affect how much heat is trapped in the atmosphere, which can influence climate. The clouds’ compositions can affect the Arctic’s water cycle, changing the amount of rain and snow that is produced. Increasing the number of clouds and changing the composition of Arctic clouds also affects northern weather systems, potentially affecting weather trends worldwide, the authors of the new study said.

Without ice nucleating particles, precipitation from clouds is less likely to happen, Heike Wex, an atmospheric scientist at the Leibniz Institute for Tropospheric Research in Leipzig, Germany, unaffiliated with the new study explained.

From the ocean to the atmosphere

To learn how biological “cloud seeds” travel from ocean depths to the atmosphere, Creamean and her colleagues took samples from 8 meters (26 feet) below the water’s surface and air samples roughly 20 meters (66 feet) above the water’s surface in the Bering Strait during an algae bloom.

Algae blooms are big increases in photosynthetic plant-like microorganisms that many ocean animals eat, including some kinds of bacteria. The researchers found bacteria known to seed clouds at the bottom of a phytoplankton bloom in the Bering Strait, but not in the surrounding air. The scientists found the same bacteria roughly 250 kilometers (155.3 miles) northwest of the bloom, suggesting a strong current transported the bacteria to a new spot. The bacteria were also in the air above the water. A storm brought the bacteria from the ocean depths to the surface, transporting the bacterial “cloud seeds” into the air in water droplets.

“What existed at the bottom of the ocean was making its way up to the surface waters,” Creamean said.

Since the scientists only were able to take samples from 20 meters (66 feet) up, they don’t yet know how the ice nucleating particles ascend to cloud elevation, which on average starts at 1.9 kilometers (1.2 miles) above the surface.

The polar regions are experiencing rapid warming from climate change. The Arctic’s accelerated warming could cause more algae blooms as well as more bacteria of the type found to seed clouds, in turn further affecting its weather systems, according to the authors.

“This is a piece of the puzzle as to how these clouds form in the Arctic and potentially impact weather patterns all over the world,” Creamean said.

Founded in 1919, AGU is a not-for-profit scientific society dedicated to advancing Earth and space science for the benefit of humanity. We support 60,000 members, who reside in 135 countries, as well as our broader community, through high-quality scholarly publications, dynamic meetings, our dedication to science policy and science communications, and our commitment to building a diverse and inclusive workforce, as well as many other innovative programs. AGU is home to the award-winning news publication Eos, the Thriving Earth Exchange, where scientists and community leaders work together to tackle local issues, and a headquarters building that represents Washington, D.C.’s first net zero energy commercial renovation. We are celebrating our Centennial in 2019. #AGU100

This paper is freely available for 30 days. Journalists and public information officers (PIOs) can download a PDF copy of the article by clicking on this link: https://agupubs.onlinelibrary.wiley.com/doi/epdf/10.1029/2019GL083039

Whispers From The Deep Sea: The Subtle Sounds Of Hydrothermal Vents
Categories