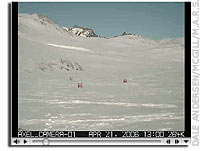 The Campbell Scientific met station (automated weather station) we installed last April at M.A.R.S includes an enclosed digital camera (CC640) that is programmed to acquire two images per day – one at 9 am and another at 1 pm local time.

Axel Heiberg is in the Central Time Zone for North America.

This summer I downloaded the images that we had collected between April 17 and June 22. Afterwards, I assembled the images into a QuickTime video in order to see the change in weather patterns during the collection period.

Note the subtle changes that take place with respect to the snow cover. As the temperatures warm from well below freezing to above, the snow begins to melt and the ground begins to appear. But snow falls again, and visibility drops noticeably as the low cloud cover and fog moves in and out.

The three drums mark the end of the runway with the ice-cover of Colour Lake being just behind and to the left. In the background is a ragged ridge known as Marie Antoinette which allows us to estimate cloud height and horizontal visibility which is very useful for deciding whether or not to send in an aircraft.

If there are people at the camp they can just radio in the conditions, but now we can also phone up the station to see what conditions are like before we go there, which can save a lot of time and money!