What's Happening In The Depths Of Distant Worlds?

The physics and chemistry that take place deep inside our planet are fundamental to the existence of life as we know it. But what forces are at work in the interiors of distant worlds, and how do these conditions affect their potential for habitability?

New work led by Carnegie’s Earth and Planets Laboratory uses lab-based mimicry to reveal a new crystal structure that has major implications for our understanding of the interiors of large, rocky exoplanets. Their findings are published by Proceedings of the National Academy of Sciences.

“The interior dynamics of our planet are crucial for maintaining a surface environment where life can thrive–driving the geodynamo that creates our magnetic field and shaping the composition of our atmosphere,” explained Carnegie’s Rajkrishna Dutta, the lead author. “The conditions found in the depths of large, rocky exoplanets such as super-Earths would be even more extreme.”

Silicate minerals make up most of the Earth’s mantle and are thought to be a major component of the interiors of other rocky planets, as well, based on calculations of their densities. On Earth, the structural changes induced in silicates under high pressure and temperature conditions define key boundaries in Earth’s deep interior, like that between the upper and lower mantle.

The research team–which included Carnegie’s Sally June Tracy, Ron Cohen, Francesca Miozzi, Kai Luo, and Jing Yang, as well as Pamela Burnley of the University of Nevada Las Vegas, Dean Smith and Yue Meng of Argonne National Laboratory, Stella Chariton and Vitali Prakapenka of the University of Chicago, and Thomas Duffy of Princeton University–was interested in probing the emergence and behavior of new forms of silicate under conditions mimicking those found in distant worlds. 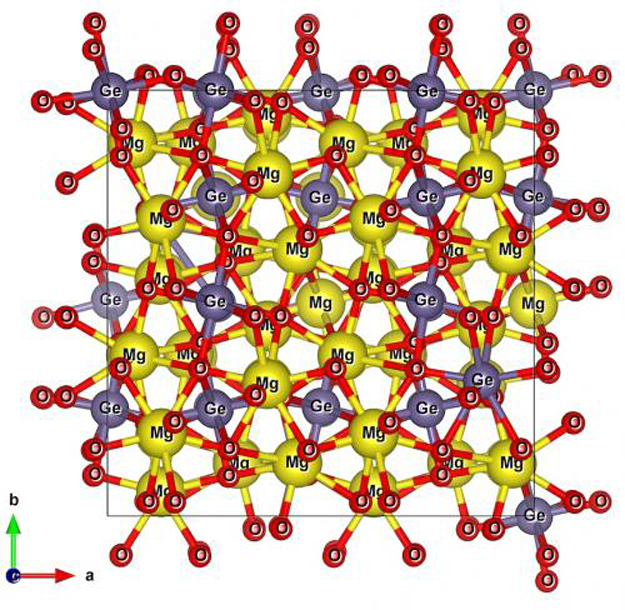 Working with magnesium germanate, Mg2GeO4, analogous to one of the mantle’s most abundant silicate minerals, the team was able to glean information about the potential mineralogy of super-Earths and other large, rocky exoplanets. Under about 2 million times normal atmospheric pressure a new phase emerged with a distinct crystalline structure that involves one germanium bonded with eight oxygens. The new eight-coordinated, intrinsically discorded mineral is expected to strongly affect the internal temperature and dynamics of these planets. Illustration is courtesy of Rajkrishna Dutta.

“For decades, Carnegie researchers have been leaders at recreating the conditions of planetary interiors by putting small samples of material under immense pressures and high temperatures,” said Duffy.

But there are limitations on scientists’ ability to recreate the conditions of exoplanetary interiors in the lab. Theoretical modeling has indicated that new phases of silicate emerge under the pressures expected to be found in the mantles of rocky exoplanets that are at least four times more massive than Earth. But this transition has not yet been observed.

However, germanium is a good stand-in for silicon. The two elements form similar crystalline structures, but germanium induces transitions between chemical phases at lower temperatures and pressures, which are more manageable to create in laboratory experiments.

Working with magnesium germanate, Mg2GeO4, analogous to one of the mantle’s most abundant silicate minerals, the team was able to glean information about the potential mineralogy of super-Earths and other large, rocky exoplanets.

Under about 2 million times normal atmospheric pressure a new phase emerged with a distinct crystalline structure that involves one germanium bonded with eight oxygens.

“The most interesting thing to me is that magnesium and germanium, two very different elements, substitute for each other in the structure,” Cohen said.

Under ambient conditions, most silicates and germanates are organized in what’s called a tetrahedral structure, one central silicon or germanium bonded with four other atoms. However, under extreme conditions, this can change.

“The discovery that under extreme pressures, silicates could take on a structure oriented around six bonds, rather than four, was a total game-changer in terms of scientists’ understanding of deep Earth dynamics,” Tracy explained. “The discovery of an eightfold orientation could have similarly revolutionary implications for how we think about the dynamics of exoplanet interiors.”

This research was supported by the U.S National Science Foundation, the U.S. Department of Energy, the Gauss Centre for Supercomputing and the endowment of the Carnegie Institution for Science,

The authors acknowledge the support of GeoSoilEnviroCARS, which is supported by the U.S. NSF, Earth Sciences, and the U.S. Department of Energy, Geosciences. Portions of this work were performed at HPCAT, Advanced Photo Source, Argonne National Laboratory. HPCAT operations are supported by DOE-National Nuclear Security Administration Office of Experimental Sciences. This research used resources of the Advanced Photon Source, aDOE Offce of Science User Facility operated by Argonne National Laboratory.