When considering the implications of thawing permafrost, our initial worries are likely to turn to the major issue of methane being released into the atmosphere and exacerbating global warming or issues for local communities as the ground and infrastructure become unstable. While this is bad enough, new research reveals that the potential effects of permafrost thaw could also pose serious health threats.

As part of the ESA-NASA Arctic Methane and Permafrost Challenge, new research has revealed that rapidly thawing permafrost in the Arctic has the potential to release antibiotic-resistant bacteria, undiscovered viruses and even radioactive waste from Cold War nuclear reactors and submarines.

Permafrost, or permanently frozen land, covers around 23 million square kilometres in the northern hemisphere. Most of the permafrost in the Arctic is up to a million years old – typically the deeper it is, the older it is.

In addition to microbes, it has housed a diverse range of chemical compounds over millennia whether through natural processes, accidents or deliberate storage. However, with climate change causing the Arctic to warm much faster than the rest of the world, it is estimated that up to two-thirds of the near-surface permafrost could be lost by 2100.

Thawing permafrost releases greenhouse gases – carbon dioxide and methane – to the atmosphere, as well as causing abrupt changes to the landscape.

However, research, published recently in Nature Climate Change, found the implications of waning permafrost could be much more widespread – with potential for the release of bacteria, unknown viruses, nuclear waste and radiation, and other chemicals of concern.

The paper describes how deep permafrost, at a depth of more than three metres, is one of the few environments on Earth that has not been exposed to modern antibiotics. More than 100 diverse microorganisms in Siberia’s deep permafrost have been found to be antibiotic resistant. As the permafrost thaws, there is potential for these bacteria to mix with meltwater and create new antibiotic-resistant strains. 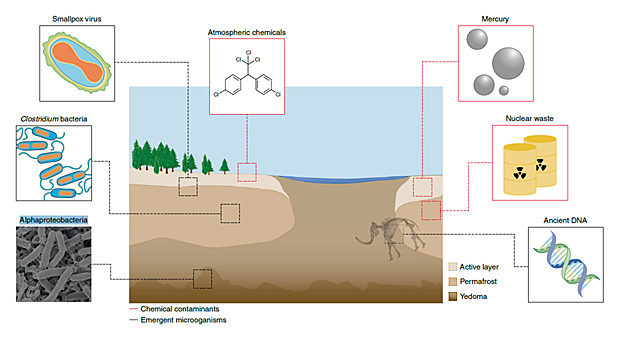 Another risk concerns by-products of fossil fuels, which have been introduced into permafrost environments since the beginning of the industrial revolution. The Arctic also contains natural metal deposits, including arsenic, mercury and nickel, which have been mined for decades and have caused huge contamination from waste material across tens of millions of hectares.

Now-banned pollutants and chemicals, such as the insecticide dichloro-diphenyl-trichloroethane, DDT, that were transported to the Arctic atmospherically and over time became trapped in permafrost, are at risk of re-permeating the atmosphere.

There is also greater scope for transportation of pollutants, bacteria and viruses. More than 1000 settlements, whether resource extraction, military and scientific projects, have been created on permafrost during the last 70 years. That, coupled with the local populace, increases the likelihood of accidental contact or release. Despite the findings of the research, it says the risks from emergent microorganisms and chemicals within permafrost are poorly understood and largely unquantified. It states that further in-depth research in the area is vital to gain better insight into the risks and to develop mitigation strategies.

The review’s lead author, Kimberley Miner, from NASA Jet Propulsion Laboratory, said, “We have a very small understanding of what kind of extremophiles — microbes that live in lots of different conditions for a long time — have the potential to re-emerge. These are microbes that have coevolved with things like giant sloths or mammoths, and we have no idea what they could do when released into our ecosystems.

“It’s important to understand the secondary and tertiary impacts of these large-scale Earth changes such as permafrost thaw. While some of the hazards associated with the thaw of up to a million years of material have been captured, we are a long way from being able to model and predict exactly when and where they will happen. This research is critical.”

ESA’s Diego Fernandez added, “Research being conducted as part of the ESA-NASA Arctic Methane and Permafrost Challenge within our Science for Society programme is vital to understanding the science of the changing Arctic. Thawing permafrost clearly poses huge challenges, but more research is needed. NASA and ESA are joining forces to foster scientific collaboration across the Atlantic to ensure we develop solid science and knowledge so that decision-makers are armed with the correct information to help address these issues.”