Photosynthesis, the process by which plants and other organisms convert sunlight into chemical energy, has been a major player during the evolution of life and our planet’s atmosphere.

Although most of the ins and outs of photosynthesis are understood, how the necessary mechanisms evolved is still a topic of debate. The answer to this question, however, may actually lie buried in the mineral world.

In a recent study published in Earth Science Frontiers (10.13745/j.esf.sf.2020.12.3), scientists from Peking University, China, shifted the focus in photosynthesis research from plants and bacteria one step further back to rocks and substances found in what’s known as the “mineral membrane” of Earth. They propose that various components of this relatively thin layer, such as birnessite, goethite, and hematite, can also absorb energy from sunlight and channel it into chemical reactions. But how does this happen?

These semiconducting minerals are sensitive to specific wavelength of sunlight. When they absorb photons, electrons in lower energy states (valence band) are excited to jump into higher energy states (conduction band). The photoelectrons have sufficient energy to drive reduction reactions that would otherwise require external energy.

Surprisingly, this non-classical photosynthesis mechanism that occurs in widespread semiconducting minerals can catalyze reactions akin to those in biological photosynthesis found in cyanobacteria. For example, certain minerals can promote oxygen evolution (formation of dioxygen molecules) and carbon fixation (producing organic compounds using carbon atoms from inorganic sources). Moreover, these minerals may even act as photocatalysts for water splitting, which produces hydrogen and oxygen from water, and the conversion of atmospheric carbon dioxide into marine carbonate products. These processes combined might have played a transformative role throughout primitive Earth, causing noticeable changes in atmospheric and marine conditions to foster the evolution of early lifeforms. 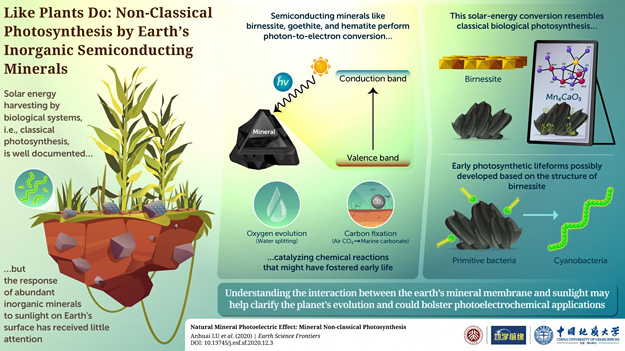 Most importantly, the scientists noted that birnessite is structurally similar to the “Mn4CaO5 complex at the core of the photosynthesis systems of modern organisms. This manganese-containing compound, which performs water splitting upon absorbing sunlight, may have actually evolved as an analog to birnessite. Lead author Dr. Anhuai Lu explains, “Our work in this new research field on the mechanisms of interaction between light, minerals, and life reveals that minerals and organisms are actually inseparable.” The scientists postulate that primitive bacteria would have depended on minerals like birnessite to convert sunlight into useful chemical energy at first, before slowly incorporating structural analogues into their cellular bodies throughout evolution.

A better understanding of non-classical photosynthesis will help scientists unravel the mysteries behind the evolution of life and the chemical composition of our planet as we know it. From a more practical standpoint, it will also aid in the development of efficient methods for harvesting solar energy. “We can use mineral photocatalysis to promote water splitting, thereby improving the efficiency of biophotosynthesis systems and leading to revolutionary technologies,” remarks Dr. Lu.

From progress in eco-friendly applications to a deeper knowledge of the history of life, it is clear that there is much to gain from studying the natural interactions between sunlight and minerals. Contrary to how the old saying goes, there still seems to be many things new under the sun!