The modeling helped the scientists explore whether the planet had an Earth-like climate for a long period.

The planetary science community agrees that Venus and Earth form as rocky planets with similar geochemical make-ups and large quantities of water. From there, leading theories about Venus’s history diverge onto two distinct paths. 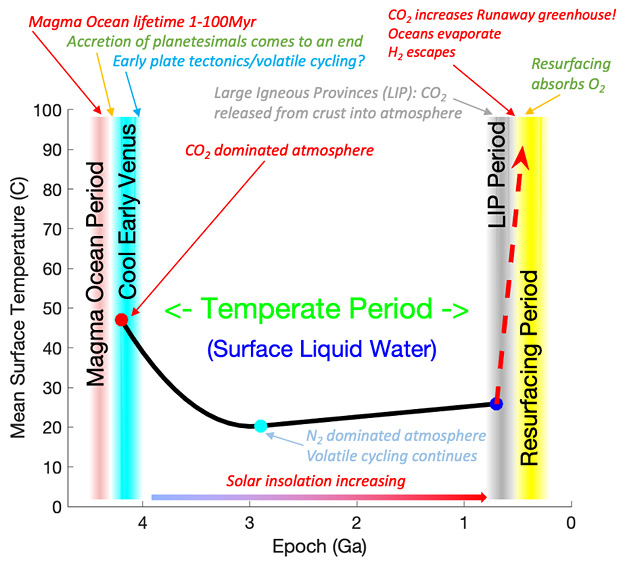 Along path one, Venus initially has an atmosphere of carbon dioxide (CO2) and steam water and a magma ocean that lasts up to 100 million years. With a highly active Sun producing much more X-ray and ultraviolet photons than now, sunlight reaching Venus efficiently splits the steam water molecules into hydrogen (H2) and oxygen (O). Give this process 100 million years, and all the H2 escapes into space and the magma ocean absorbs all the O. Once the magma ocean cools, Venus has an atmosphere with no water left and a dry surface.

Along path two, Venus has the same CO2/steam water atmosphere, but its magma ocean lasts only a few million years. Under this much shorter timeframe most of the steam water gets preserved. When the short-lived magma ocean cools, the atmospheric steam condenses onto Venus’s surface as a liquid water ocean.

Each simulation ran on 44 computing cores of the NASA Center for Climate Simulation (NCCS) Discover supercomputer. Run-times ranged from a few hours for 8-orbit simulations to 2 months for 3,000-orbit simulations. These simulations collectively covered epochs in Venus’s past, present, and future.

Output data totaling 13 terabytes was initially stored in Discover online disk and then migrated into NCCS mass storage. The researchers used the NCCS DataPortal to help distribute their results.

“NCCS supercomputing resources allowed us to run a wide suite of simulations in a modest amount of time,” said GISS research scientist Michael Way. “We also benefited from their excellent compiler and library support and their ability to keep the supercomputers running efficiently over many contiguous months with few shutdowns. It is a remarkable resource that our group treasures!”

The new GISS simulations showed that, if Venus had liquid surface water early on, then the planet could have had habitable conditions for nearly 3 billion years. The scientists also speculated that Venus could have evolved into its current hothouse state after large-scale resurfacing from volcanic eruptions released enough CO2 to dry up the surface water. Indeed, there is evidence that volcanic activity continues on Venus, as published in a recent study by Swiss Federal Institute of Technology and University of Maryland, College Park researchers.

Way and his colleagues will be exploring both areas in future simulations at NCCS. “We wish to look more closely at the very early evolution of Venus–the first few 100 million years–to better understand if water could condense on the surface or not,” Way said. “We also plan to investigate if it is possible for Venus to go into a runaway greenhouse state, as it is in today, from the clement state we propose.” 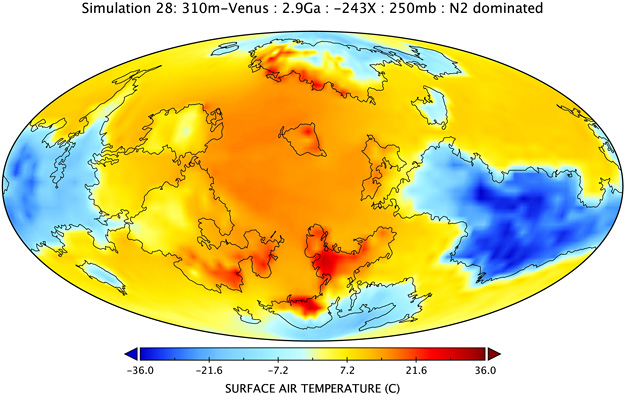 This visualization of Simulation 28 shows surface air temperature (Celsius) 2.9 billion years ago for a hypothetical Venus having a nitrogen (N2)-dominated atmosphere with .25-bar surface pressure and an Earth topography with a 310-meter deep ocean. It was the most Earth-like of the 45 simulations, even allowing for the possibility of snow at higher elevations. Figure from M.J. Way and A.D. Del Genio, J. Geophys. Res. Planets.