The eyes of the extinct sea scorpion Jaekelopterus rhenaniae have the same structure as the eyes of modern horseshoe crabs (Limulidae). The compound eyes of the giant predator exhibited lens cylinders and concentrically organized sensory cells enclosing the end of a highly specialized cell.

This is the result of research Dr Brigitte Schoenemann, professor of zoology at the Institute of Biology Didactics at the University of Cologne, conducted with an electron microscope. Cooperation partners in the project were Dr Markus Poschmann from the Directorate General of Cultural Heritage RLP, Directorate of Regional Archaeology/Earth History and Professor Euan N.K. Clarkson from the University of Edinburgh. The results of the study ‘Insights into the 400 million-year-old eyes of giant sea scorpions (eurypterida) suggest the structure of Palaeozoic compound eyes’ have been published in the journal Scientific Reports – Nature.

The eyes of modern horseshoe crabs consist of compounds, so-called ommatidia. Unlike, for example, insects that have compound eyes with a simple lens, the ommatidia of horseshoe crabs are equipped with a lens cylinder that continuously refracts light and transmits it to the sensory cells.

These sensory cells are grouped in the form of a rosette around a central light conductor, the rhabdom, which is part of the sensory cells and converts light signals into nerve signals to transmit them to the central nervous system. At the centre of this ‘light transmitter’ in horseshoe crabs is a highly specialized cell end, which can connect the signals of neighbouring compounds in such a way that the crab perceives contours more clearly. This can be particularly useful in conditions of low visibility under water. In the cross-section of the ommatidium, it is possible to identify the end of this specialized cell as a bright point in the centre of the rhabdom.

Brigitte Schoenemann used electron microscopes to examine fossil Jaekelopterus rhenaniae specimens to find out whether the compound eyes of the giant scorpion and the related horseshoe crabs are similar or whether they are more similar to insect or crustacean eyes. She found the same structures as in horseshoe crabs. Lens cylinders, sensory cells and even the highly specialized cells were clearly discernible. 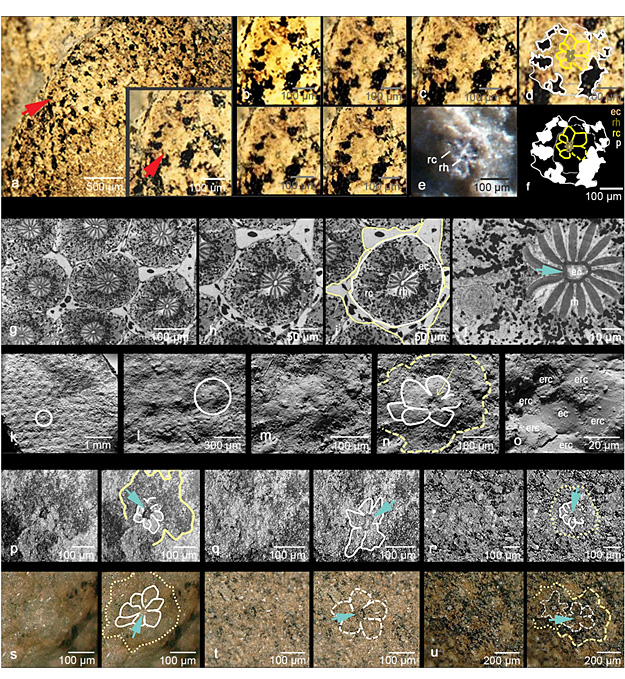 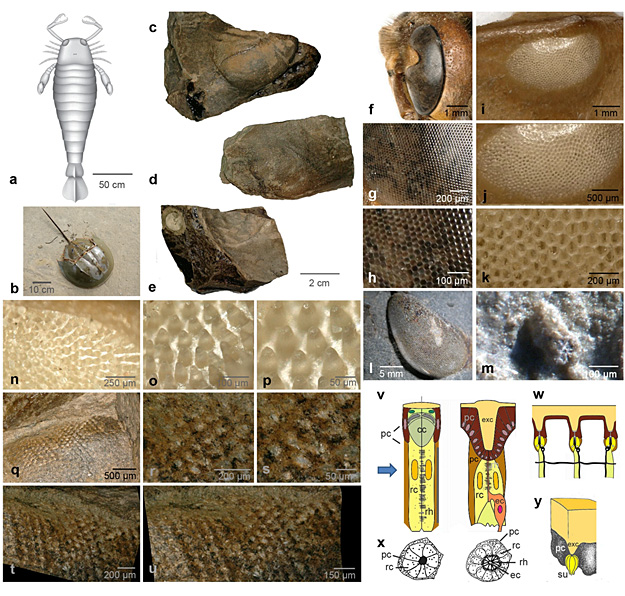 ‘This bright spot belongs to a special cell that only occurs in horseshoe crabs today, but apparently already existed in eurypterida,’ explained Schoenemann. ‘The structures of the systems are identical. It follows that very probably this sort of contrast enhancement already evolved more than 400 million years ago,’ she added. Jaekelopterus most likely hunted placoderm. Here, its visual apparatus was clearly an advantage in the murky seawater.

Sea scorpions, which first appeared 470 million years ago, died out about 250 million years ago, at the end of the Permian age – along with about 95 percent of all marine life. Some specimens were large oceanic predators, such as Jaekelopterus rhenaniae. It reached a length of 2.5 meters and belonged to the family of eurypterida, the extinct relatives of the horseshoe crab. Eurypterida are arthropods, which belong to the subphylum Chelicerata, and are therefore related to spiders and scorpions.

Among the arthropods there are two large groups: mandibulates (crustaceans, insects, trilobites) and chelicerates (arachnid animals such as sea scorpions). In recent years, Schoenemann has been able to clarify the eye structures of various trilobite species and to make decisive contributions to research into the evolution of the compound eye. ‘Until recently, scientists thought that soft tissues do not fossilize. Hence these parts of specimens were not examined until not so long ago’, she concluded.

The new findings on the eye of the sea scorpion are important for the evolution of the compound eyes not only of chelicerates, but also for determining the position of sea scorpions in the pedigree of these animals and for the comparison with the eyes of the related group of mandibulates.

Earth’s Oldest Stromatolites And The Search For Life On Mars