The beginning of the end started with violent shaking that raised giant waves in the waters of an inland sea in what is now North Dakota. Then, tiny glass beads began to fall like birdshot from the heavens. The rain of glass was so heavy it may have set fire to much of the vegetation on land. In the water, fish struggled to breathe as the beads clogged their gills.

The heaving sea turned into a 30-foot wall of water when it reached the mouth of a river, tossing hundreds, if not thousands, of fresh-water fish — sturgeon and paddlefish — onto a sand bar and temporarily reversing the flow of the river. Stranded by the receding water, the fish were pelted by glass beads up to 5 millimeters in diameter, some burying themselves inches deep in the mud. The torrent of rocks, like fine sand, and small glass beads continued for another 10 to 20 minutes before a second large wave inundated the shore and covered the fish with gravel, sand and fine sediment, sealing them from the world for 66 million years.

This unique, fossilized graveyard — fish stacked one atop another and mixed in with burned tree trunks, conifer branches, dead mammals, mosasaur bones, insects, the partial carcass of a Triceratops, marine microorganisms called dinoflagellates and snail-like marine cephalopods called ammonites — was unearthed by paleontologist Robert DePalma over the past six years in the Hell Creek Formation, not far from Bowman, North Dakota. The evidence confirms a suspicion that nagged at DePalma in his first digging season during the summer of 2013 — that this was a killing field laid down soon after the asteroid impact that eventually led to the extinction of all ground-dwelling dinosaurs. The impact at the end of the Cretaceous Period, the so-called K-T boundary, exterminated 75 percent of life on Earth.

“This is the first mass death assemblage of large organisms anyone has found associated with the K-T boundary,” said DePalma, curator of paleontology at the Palm Beach Museum of Natural History in Florida and a doctoral student at the University of Kansas. “At no other K-T boundary section on Earth can you find such a collection consisting of a large number of species representing different ages of organisms and different stages of life, all of which died at the same time, on the same day.”

In a paper to appear next week in the journal Proceedings of the National Academy of Sciences, he and his American and European colleagues, including two University of California, Berkeley, geologists, describe the site, dubbed Tanis, and the evidence connecting it with the asteroid or comet strike off Mexico’s Yucatan Peninsula 66 million years ago. That impact created a huge crater, called Chicxulub, in the ocean floor and sent vaporized rock and cubic miles of asteroid dust into the atmosphere. The cloud eventually enveloped Earth, setting the stage for Earth’s last mass extinction. 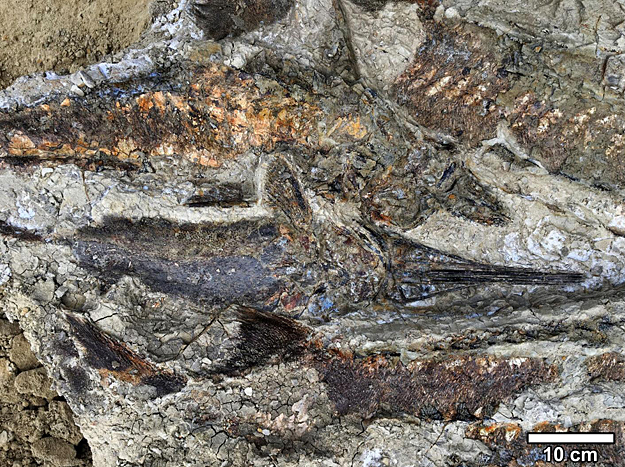 Fossilized fish piled one atop another, suggesting that they were flung ashore and died stranded together on a sand bar after the wave from the seiche withdrew. CREDIT Photo courtesy of Robert DePalma

“It’s like a museum of the end of the Cretaceous in a layer a meter-and-a-half thick,” said Mark Richards, a UC Berkeley professor emeritus of earth and planetary science who is now provost and professor of earth and space sciences at the University of Washington.

Richards and Walter Alvarez, a UC Berkeley Professor of the Graduate School who 40 years ago first hypothesized that a comet or asteroid impact caused the mass extinction, were called in by DePalma and Dutch scientist Jan Smit to consult on the rain of glass beads and the tsunami-like waves that buried and preserved the fish. The beads, called tektites, formed in the atmosphere from rock melted by the impact.

Richards and Alvarez determined that the fish could not have been stranded and then buried by a typical tsunami, a single wave that would have reached this previously unknown arm of the Western Interior Seaway no less than 10 to 12 hours after the impact 3,000 kilometers away, if it didn’t peter out before then. Their reasoning: The tektites would have rained down within 45 minutes to an hour of the impact, unable to create mudholes if the seabed had not already been exposed.

Instead, they argue, seismic waves likely arrived within 10 minutes of the impact from what would have been the equivalent of a magnitude 10 or 11 earthquake, creating a seiche (pronounced saysh), a standing wave, in the inland sea that is similar to water sloshing in a bathtub during an earthquake. Though large earthquakes often generate seiches in enclosed bodies of water, they’re seldom noticed, Richards said. The 2011 Tohoku quake in Japan, a magnitude 9.0, created six-foot-high seiches 30 minutes later in a Norwegian fjord 8,000 kilometers away. 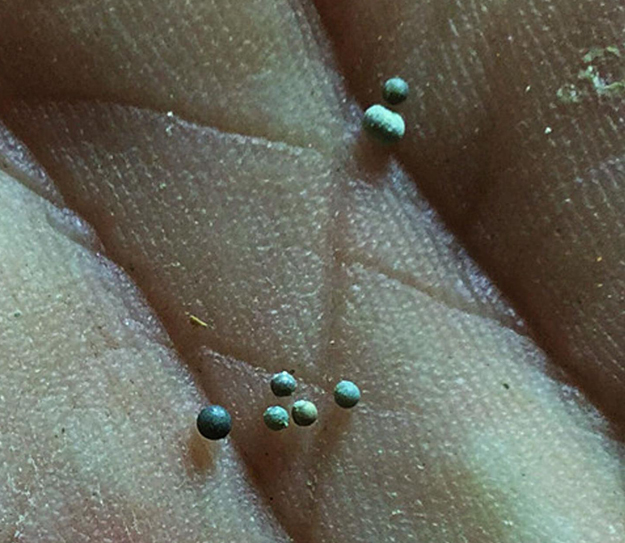 Tektites, 1 millimeter spheres of glass, recovered from the Tanis fossil bed. They were produced by the Chicxulub impact and fell within an hour of the impact. CREDIT Photo courtesy of Robert DePalma

“The seismic waves start arising within nine to 10 minutes of the impact, so they had a chance to get the water sloshing before all the spherules (small spheres) had fallen out of the sky,” Richards said. “These spherules coming in cratered the surface, making funnels — you can see the deformed layers in what used to be soft mud — and then rubble covered the spherules. No one has seen these funnels before.”

The tektites would have come in on a ballistic trajectory from space, reaching terminal velocities of between 100 and 200 miles per hour, according to Alvarez, who estimated their travel time decades ago.

“You can imagine standing there being pelted by these glass spherules. They could have killed you,” Richards said. Many believe that the rain of debris was so intense that the energy ignited wildfires over the entire American continent, if not around the world.

“Tsunamis from the Chicxulub impact are certainly well-documented, but no one knew how far something like that would go into an inland sea,” DePalma said. “When Mark came aboard, he discovered a remarkable artifact — that the incoming seismic waves from the impact site would have arrived at just about the same time as the atmospheric travel time of the ejecta. That was our big breakthrough.” 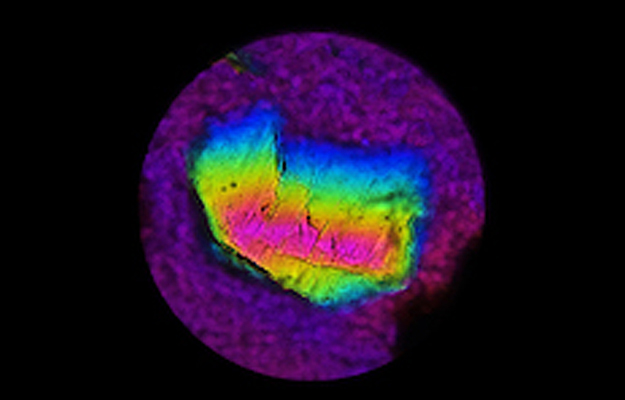 At least two huge seiches inundated the land, perhaps 20 minutes apart, leaving six feet of deposits covering the fossils. Overlaying this is a layer of clay rich in iridium, a metal rare on Earth, but common in asteroids and comets. This layer is known as the K-T, or K-Pg boundary, marking the end of the Cretaceous Period and the beginning of the Tertiary Period, or Paleogene.

In 1979, Alvarez and his father, Nobelist Luis Alvarez of UC Berkeley, were the first to recognize the significance of iridium that is found in 66 million-year-old rock layers around the world. They proposed that a comet or asteroid impact was responsible for both the iridium at the K-T boundary and the mass extinction.

The im
pact would have melted the bedrock under the seafloor and pulverized the asteroid, sending dust and melted rock into the stratosphere, where winds would have carried them around the planet and blotted out the sun for months, if not years. Debris would have rained down from the sky: not only tektites, but also rock debris from the continental crust, including shocked quartz, whose crystal structure was deformed by the impact.

The iridium-rich dust from the pulverized meteor would have been the last to fall out of the atmosphere after the impact, capping off the Cretaceous.

“When we proposed the impact hypothesis to explain the great extinction, it was based just on finding an anomalous concentration of iridium — the fingerprint of an asteroid or comet,” said Alvarez. “Since then, the evidence has gradually built up. But it never crossed my mind that we would find a deathbed like this.”

Key confirmation of the meteor hypothesis was the discovery of a buried impact crater, Chicxulub, in the Caribbean and off the coast of the Yucatan in Mexico, that was dated to exactly the age of the extinction. Shocked quartz and glass spherules were also found in K-Pg layers worldwide. The new discovery at Tanis is the first time the debris produced in the impact was found along with animals killed in the immediate aftermath of the impact.

“And now we have this magnificent and completely unexpected site that Robert DePalma is excavating in North Dakota, which is so rich in detailed information about what happened as a result of the impact,” Alvarez said. “For me, it is very exciting and gratifying!”

Jan Smit, a retired professor of sedimentary geology from Vrije Universiteit in Amsterdam in The Netherlands who is considered the world expert on tektites from the impact, joined DePalma to analyze and date the tektites from the Tanis site. Many were found in near perfect condition embedded in amber, which at the time was pliable pine pitch.

“I went to the site in 2015 and, in front of my eyes, he (DePalma) uncovered a charred log or tree trunk about four meters long which was covered in amber, which acted as sort of an aerogel and caught the tektites when they were coming down,” Smit said. “It was a major discovery, because the resin, the amber, covered the tektites completely, and they are the most unaltered tektites I have seen so far, not 1 percent of alteration. We dated them, and they came out to be exactly from the K-T boundary.”

The tektites in the fishes’ gills are also a first.

“Paddlefish swim through the water with their mouths open, gaping, and in this net, they catch tiny particles, food particles, in their gill rakers, and then they swallow, like a whale shark or a baleen whale,” Smit said. “They also caught tektites. That by itself is an amazing fact. That means that the first direct victims of the impact are these accumulations of fishes.”

Smit also noted that the buried body of a Triceratops and a duck-billed hadrosaur proves beyond a doubt that dinosaurs were still alive at the time of the impact.

“We have an amazing array of discoveries which will prove in the future to be even more valuable,” Smit said. “We have fantastic deposits that need to be studied from all different viewpoints. And I think we can unravel the sequence of incoming ejecta from the Chicxulub impact in great detail, which we would never have been able to do with all the other deposits around the Gulf of Mexico.”

“So far, we have gone 40 years before something like this turned up that may very well be unique,” Smit said. “So, we have to be very careful with that place, how we dig it up and learn from it. This is a great gift at the end of my career. Walter sees it as the same.”

Co-authors with DePalma, Smit, Richards and Alvarez are David Burnham of the University of Kansas, Klaudia Kuiper of Vrije Universiteit, Phillip Manning of Manchester University in the United Kingdom, Anton Oleinik of Florida Atlantic University, Peter Larson of the Black Hills Institute of Geological Research in South Dakota, Florentin Maurrasse of Florida International University, Johan Vellekoop of Katholieke Universiteit Leuven in Belgium and Loren Gurche of the Palm Beach Museum of Natural History.

Impact events
The Impact Of Extinction