“The hole melter was returned, but unfortunately it still does not work properly and we are unable to use it to make a dive hole or melt out the light sensors we left in the water column last year.”

“And while I am disappointed we will not be working underwater, we have moved on to other important areas of work that will occupy our time during the next two weeks. Over the last several days we drilled additional holes in the south basin as part of an effort to increase the accuracy of the bathymetry map for the lake, and to make measurements of ice-thickness; the ice-thickness data are to be used to model variations in ablation across the lake. We also used one hole to obtain samples with an Ekman dredge from the deepest point (100 m) in the south basin. These samples are currently having DNA and RNA extracted and preserved for genomic studies that will take place in the coming months and other subsamples are being preserved for additional geochemical analyses as well.

Our resident lichenologist Mikhail Andreev has been searching for lichens and although somewhat rare, he has identified at least a half-dozen species that are present at Untersee. Climatically, Untersee Oasis is extremely dry, making it difficult for lichens or moss to colonize the rocks and soils in this area. But Mikhail will continue to search for those species that have managed to adapt to the extremes here.

Over the next several days we will collect sediments from the deepest region (161 m) of the lake as well and make additional ice-thickness measurements. I need to tend to the climate stations we have deployed here over the last 10 years too – ensuring they are working properly, downloading new data and if time permits, deploying a new station at nearby Lake Obersee (1 hour drive by snow mobile from Untersee).

We will see how it goes – presently the weather is quite nice with sunny skies and warm temperatures hovering just below and above the freezing point. Fortunately the winds have been very light as well, but that will likely change in the next few days and we can expect winds to return to the more normal 20 -40 knot range again. But we will certainly take advantage of and enjoy the clement conditions for as long as we can!

“We will know more about the lichens collected after Mikhail has keyed them out. They will likely be ones that are common to Antarctica, but there could always be a new species in the group, but that is still all TBD.

The hole melter is indeed a customized device. Back in the late 1970’s when I was with George M. Simmons’ team in the McMurdo Dry Valleys, we needed to figure out a way to get through the 4-6 meters of ice on those lakes, and we (along with Art DeVries, another scientist in McMurdo at the time) came up with the basic hold melter design, which simply takes a COTS steam cleaner and connecting it to a melting coil that is used to make the hole through the ice. If you use the key words McMurdo, USAP, hole Melter, Hotsy, and lake, it should bring you up an image of what is in the current inventory at McMurdo. Mine is very nearly the same, using a Hotsy 555ss for the burner. Unfortunately is it feeling its age and I need to replace the burner unit to get it back up to 100%….I will do this next year for sure.

We have two 10×12 Weatherports used as the dive tent and lab tent. Inside the lab tent we can easily conduct work in a warm environment (propane heaters: Mr. Heater, Big Buddy heater). We had hoped to do some sequencing here, but that major storm early on not only destroyed our camp, but we lost environmental control for the flow cells, which were subjected to well-below freezing temperatures, effectively rendering them useless. But, we can easily do the extractions using standard protocols for such work and the samples are being stored in a cryoshipoper that was primed with LN2 just before we departed Cape Town. This lets us keep the samples at LN2 temps which is critical for the planned genomics analysis back in Sarah Johnson’s lab at Georgetown University.

We can drill 25 cm diameter holes in the ice using a Jiffy ice auger, bits and extensions. This hole is large enough for us to get some sampling equipment such as Niskin bottles, Kemmerrer bottles, coring devices and small dredges that we use for collecting samples from below the ice in the water column and the bottom of the lake. I also use the holes to lower CTDs (Hydrolab DS5, YS6600, RR Concerto plus light, and Li-Cor light sensors into the water column for measurements. And, at times, we simply suspend longer-term sensors (e.g, light , temp , pressure, Chlorophyl loggers) in the water column retrieving them days, weeks or months later. So what we do tends to depend on the questions being asked and the logistics of a particular field season.

In fact, time to go collect data from soil thermistors that were place out on the moraine last year. 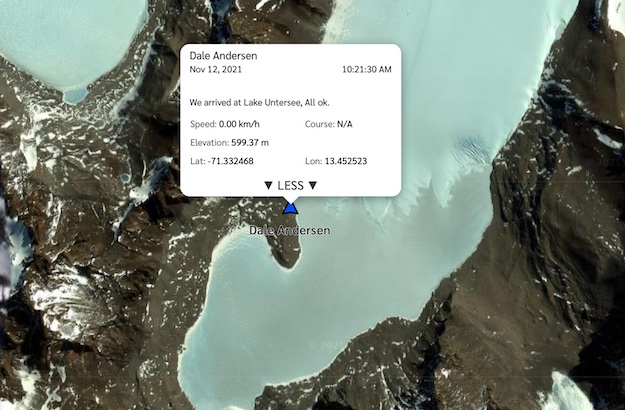