An Interesting Picture From Mars (Updated)

Keith’s Note: NASA recently posted an image taken by the Mars Hand Lens Imager (MAHLI) aboard NASA’s Mars rover Curiosity. A reader from Australia contacted me to point out some curious structures within the rock featured in that image.

I get a lot of emails like this. Normally these emails include something that the reader has totally distorted using Photoshop or contains some blurry shape on Mars that reminds them of a household appliance or cute little animal.

I am a biologist and used to work at NASA’s life science division and have done some fossil collecting in the field. So I’ve looked at things before that look like they are fossils only to determine that they are the result of non-biological processes.

I noticed something curious about this image right away. There are five partially visible football-shaped ring-like structures with some internal structure. The five structures seem to be the exact same shape and size, are oriented in the same direction, and seem to be in the same layer of what appears to be a sedimentary rock. To rock seems to be an amalgam of rock grains or sand that look like they have been compressed together. So these football-shaped things could just be softer pebbles that have eroded differently.

But I can’t help noticing a certain self-similarity to these structures and that they look like stalks or stems that have all been sheared off. They also remind me of shells or carapaces. Or they could just be martian pebbles (remember the initial reaction to the “blueberries”?).

I have sent an inquiry to NASA. Let’s see what they say. I’ll include their response in a revised version of this posting. 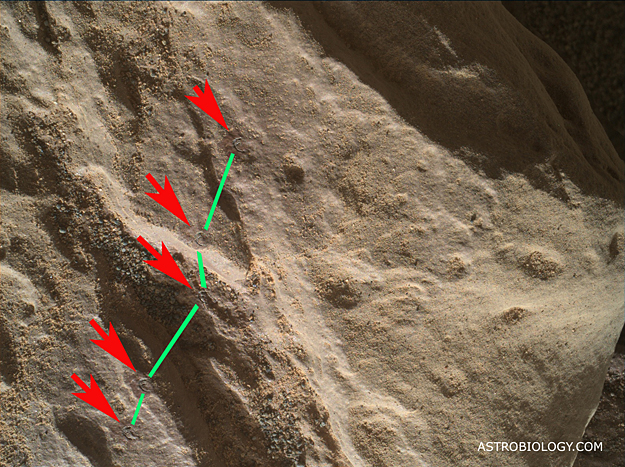 Keith’s update 1 February 2018: After looking at this picture for a while (I still do not know the scale) I noticed that the 5 structures line up – if you ignore the one in the middle the remaining 4 form a straight line. The middle one, which seems to be on a higher portion of the rock, is displaced as you’d expect from an image taken at an angle. If you take that into account they all see to be in a straight line. So why are these things lined up like this? (Larger image)

Keith’s further update 1 February 2018: I got another image from a reader in southern California that also shows 5 marks in a row with a similar semi-circular shape. He thought that this might be an artifact from the process of cleaning the surface for observation. Then my original source in Australia heard from someone@nasa to the effect that these markings are the result of the laser used to analyze rocks but that the markings look different this time. I am still awaiting an official response directly from NASA.

Today’s lesson: when looking for life on another world it is important to remember what is happening on both sides of the microscope.

Keith’s update 2 February 2018: According to NASA HQ these features are “marks left by the Laser Induced Breakdown Spectrometer on ChemCam – basically zot marks.” 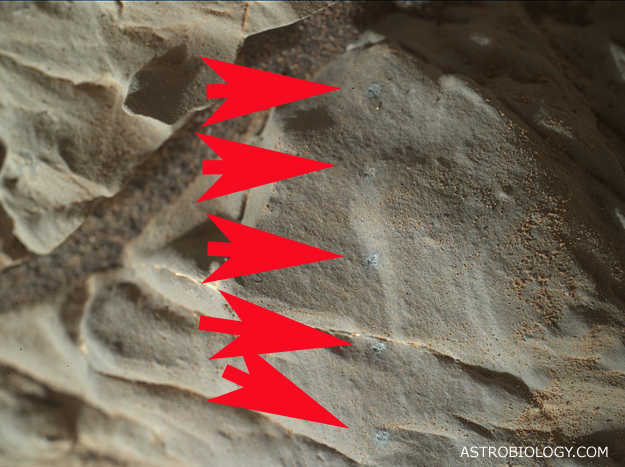 According to NASA’s caption for the original (top) image:

“Using an onboard focusing process, the Mars Hand Lens Imager (MAHLI) aboard NASA’s Mars rover Curiosity created this product by merging two to eight images previously taken by the MAHLI, located on the turret at the end of the rover’s robotic arm.

Curiosity performed the merge on January 29, 2018, Sol 1949 of the Mars Science Laboratory Mission, at 16:35:19 UTC. The focus motor count position was 14429. This number indicates the lens position of the first image that was merged.

The onboard focus merge is sometimes performed on images acquired the same sol as the merge, and sometimes uses pictures obtained on an earlier sol. Focus merging is a method to make a composite of images of the same target acquired at different focus positions to bring all (or, as many as possible) features into focus in a single image. Because the MAHLI focus merge is performed on Mars, it also serves as a means to reduce the number of images sent back to Earth. Each focus merge produces two images: a color, best-focus product and a black-and-white image that scientists can use to estimate focus position for each element of the best focus product. Thus, up to eight images can be merged, reducing the number of images returned to Earth to two.”