In 2013, the European Space Agency and Roscosmos — the Russian governmental body responsible for space research — agreed to cooperate on ExoMars, the first joint interplanetary mission between ESA and Russia.

This project now involves scientists from 29 research organizations, including MIPT and the Space Research Institute of the Russian Academy of Sciences, which is the leading contributor of hardware and equipment on the Russian side. By now, the first package of observation instruments has been delivered into Mars orbit to seek the minor chemical components of the planet’s atmosphere that may be traces of primitive life. Even if the new data prove to be inconclusive, they will definitely heat up the discussion on whether there ever was life on the red planet. In early 2018, the ExoMars satellite with research instruments on board will lower into its operational orbit and begin observations of the Martian atmosphere. A recent article in Space Science Reviews describes the makeup and objectives of one of the two Russian-built instruments carried by the orbiter.

The ExoMars joint space mission of ESA and Roscosmos involves two phases. The first one started on March 14, 2016, with the launch of a Proton-M booster rocket from Russia’s space complex in Baikonur, Kazakhstan. The rocket launched two modules: the Schiaparelli lander and the Trace Gas Orbiter (TGO). The two were delivered to Mars in 226 days, making a journey of 500 million kilometers.

Schiaparelli was intended to test the technology for future landings. It attempted a landing but crashed when it hit the surface of Mars. TGO’s objectives are to detect trace gases in the atmosphere, map water ice distribution below the surface, and conduct high-resolution imaging, including stereo surface imaging.

The favorable periods for sending spacecraft to Mars, known as launch windows, happen once in about two years, and the second phase of the ExoMars mission is scheduled for 2020. It is planned that a new lander will deploy a rover to navigate autonomously across the Martian surface, transmitting the data it collects via TGO.

The main objective of the ExoMars mission is finding an answer to one of the most intriguing questions in modern science: Did life ever exist on Mars?

TGO’s primary scientific objective is to study the climate, atmosphere, and surface of Mars. Using its onboard detectors, sensitive enough to spot trace amounts of gases, the orbiter is expected to settle the doubts concerning the presence of atmospheric methane on Mars. This gas was previously detected by Earth-based telescopes and NASA’s Curiosity rover.

The Russian-built ACS (fig. 1) comprises three infrared spectrometers. It was made sensitive enough to detect and measure trace amounts of atmospheric gases such as methane, which could be a sign of geological or biological activity on Mars. The spectrometers have a resolving power of 10,000 or more and a broad spectral coverage — from 0.7 to 17 micrometers. With their help, TGO will clarify the role of the major Martian atmospheric constituents — carbon dioxide, water vapor, and aerosols — in the planet’s climate. 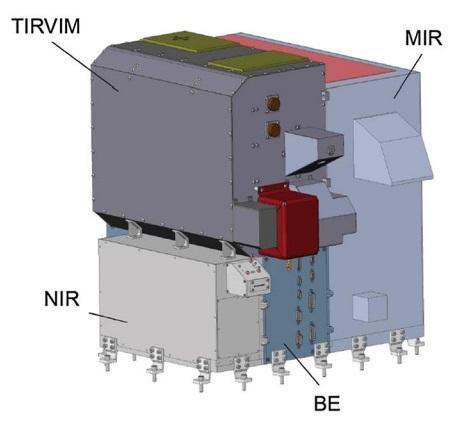 The near-infrared (NIR) channel is accommodated by a versatile echelle spectrometer covering the spectral range between 0.7 and 1.6 micrometers with a resolving power of about 20,000. This device will mainly focus on the measurements of water vapor, aerosols, the dayside airglows of molecular oxygen, and the nightside airglows caused by the photochemical processes in the Martian atmosphere. Observations in the near-infrared band will be conducted in three primary modes (fig. 2). Namely, the solar occultation measurements of light passing through the Martian atmosphere and the nadir — or “straight-down” — measurements of sunlight reflected by the planet and its own radiation. Limb measurements are also supported.

The mid-infrared (MIR) channel is a cross-dispersion echelle spectrometer dedicated to solar occultation measurements in the 2.2-4.4 micrometer range. It has a resolving power of more than 50,000. By design, ACS-MIR will make high-sensitivity measurements of trace gas content, including methane and aerosol concentrations, and the deuterium-to-hydrogen ratio. Meeting the key objectives of the ExoMars mission will depend on observations in the mid-infrared band. It is largely this channel that holds promise of a scientific breakthrough.

“It enables measurements of Martian atmosphere that are hundreds of times more accurate than ever before,” says chief engineer Alexander Trokhimovskiy of the Space Research Institute, RAS, who led the work on ACS-MIR. “Also, the probe is bound for an orbit that makes fairly frequent solar occultation observations possible.”

“MIPT has developed data processing algorithms and designed a general circulation model of Martian atmosphere, which is required for planning experiments and interpreting their results,” adds Alexander Rodin, the head of the Applied Infrared Spectroscopy Lab at MIPT. 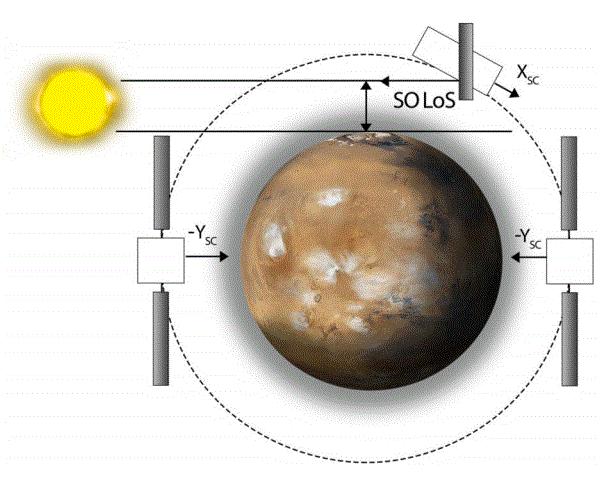 Three observation modes of the Trace Gas Orbiter: the so-called solar occultation measurements (top right) of light passing through the Martian atmosphere and nadir, or ‘straight-down,’ measurements of reflected sunlight and Mars’ own radiation from its dayside (left) and nightside (right). CREDIT MIPT Press Office

Known as TIRVIM, the third ACS instrument is a Fourier-transform spectrometer operating in the 1.7-17-micrometer range with a resolution of 0.2-1.3 per centimeter. It is responsible for gathering the data on Martian climate: atmospheric temperature profiles, dust content, and surface temperature. Thermal infrared measurements are expected to map temperatures from the surface of the planet all the way up to the altitude of about 60 kilometers. The instrument will also make it possible to estimate the optical depths of Martian dust and clouds with unparalleled precision, providing an opportunity to detect ozone and hydrogen peroxide — two gases fundamental to Martian photochemistry (fig. 3).

The TIRVIM detector owes the first half of its name to the thermal infrared, or TIR, spectral band, but the three final letters in the acronym honor Vasily Ivanovich Moroz, the founder of Russian infrared spectrometry and long-standing head of the Department of Planetary Physics at the Space Research Institute of the Russian Academy of Sciences.