Researchers have identified traces of what they believe is the earliest known prehistoric ancestor of humans – a microscopic, bag-like sea creature, which lived about 540 million years ago.

Named Saccorhytus, after the sack-like features created by its elliptical body and large mouth, the species is new to science and was identified from microfossils found in China. It is thought to be the most primitive example of a so-called “deuterostome” – a broad biological category that encompasses a number of sub-groups, including the vertebrates.

If the conclusions of the study, published in the journal Nature, are correct, then Saccorhytus was the common ancestor of a huge range of species, and the earliest step yet discovered on the evolutionary path that eventually led to humans, hundreds of millions of years later.

Modern humans are, however, unlikely to perceive much by way of a family resemblance. Saccorhytus was about a millimetre in size, and probably lived between grains of sand on the seabed. Its features were spectacularly preserved in the fossil record – and intriguingly, the researchers were unable to find any evidence that the animal had an anus.

The study was carried out by an international team of academics, including researchers from the University of Cambridge in the UK and Northwest University in Xi’an China, with support from other colleagues at institutions in China and Germany. 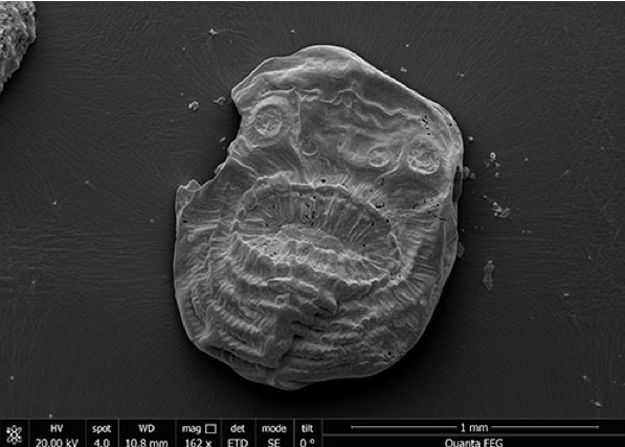 Simon Conway Morris, Professor of Evolutionary Palaeobiology and a Fellow of St John’s College, University of Cambridge, said: “We think that as an early deuterostome this may represent the primitive beginnings of a very diverse range of species, including ourselves. To the naked eye, the fossils we studied look like tiny black grains, but under the microscope the level of detail is jaw-dropping. All deuterostomes had a common ancestor, and we think that is what we are looking at here.”

Degan Shu, from Northwest University, added: “Our team has notched up some important discoveries in the past, including the earliest fish and a remarkable variety of other early deuterostomes. Saccorhytus now gives us remarkable insights into the very first stages of the evolution of a group that led to the fish, and ultimately, to us.”

Most other early deuterostome groups are from about 510 to 520 million years ago, when they had already begun to diversify into not just the vertebrates, but the sea squirts, echinoderms (animals such as starfish and sea urchins) and hemichordates (a group including things like acorn worms). This level of diversity has made it extremely difficult to work out what an earlier, common ancestor might have looked like.

The Saccorhytus microfossils were found in Shaanxi Province, in central China, and pre-date all other known deuterostomes. By isolating the fossils from the surrounding rock, and then studying them both under an electron microscope and using a CT scan, the team were able to build up a picture of how Saccorhytus might have looked and lived. This revealed features and characteristics consistent with current assumptions about primitive deuterostomes.

Dr Jian Han, of Northwest University, said: “We had to process enormous volumes of limestone – about three tonnes – to get to the fossils, but a steady stream of new finds allowed us to tackle some key questions: was this a very early echinoderm, or something even more primitive? The latter now seems to be the correct answer.”

In the early Cambrian period, the region would have been a shallow sea. Saccorhytus was so small that it probably lived in between individual grains of sediment on the sea bed.

The study suggests that its body was bilaterally symmetrical – a characteristic inherited by many of its descendants, including humans – and was covered with a thin, relatively flexible skin. This in turn suggests that it had some sort of musculature, leading the researchers to conclude that it could have made contractile movements, and got around by wriggling.

Perhaps its most striking feature, however, was its rather primitive means of eating food and then dispensing with the resulting waste. Saccorhytus had a large mouth, relative to the rest of its body, and probably ate by engulfing food particles, or even other creatures.

A crucial observation are small conical structures on its body. These may have allowed the water that it swallowed to escape and so were perhaps the evolutionary precursor of the gills we now see in fish. But the researchers were unable to find any evidence that the creature had an anus. “If that was the case, then any waste material would simply have been taken out back through the mouth, which from our perspective sounds rather unappealing,” Conway Morris said.

The findings also provide evidence in support of a theory explaining the long-standing mismatch between fossil evidence of prehistoric life, and the record provided by biomolecular data, known as the “molecular clock”.

Technically, it is possible to estimate roughly when species diverged by looking at differences in their genetic information. In principle, the longer two groups have evolved separately, the greater the biomolecular difference between them should be, and there are reasons to think this process is more or less clock-like.

Unfortunately, before a point corresponding roughly to the time at which Saccorhytus was wriggling in the mud, there are scarcely any fossils available to match the molecular clock’s predictions. Some researchers have theorised that this is because before a certain point, many of the creatures they are searching for were simply too small to leave much of a fossil record. The microscopic scale of Saccorhytus, combined with the fact that it is probably the most primitive deuterostome yet discovered, appears to back this up.

Inset image: Photographs of the fossils show the spectacularly detailed levels of preservation which allowed researchers to identify and study the creature. Credit: Jian Han.