Astronomers have discovered a ‘hot molecular core,’ a cocoon of molecules surrounding a newborn massive star, for the first time outside our galaxy.

The discovery, which marks the first important step for observational studies of extragalactic hot molecular cores and challenges the hidden chemical diversity of our universe, appears in a paper in The Astrophysical Journal Volume 827.

The scientists from Tohoku University, the University of Tokyo, the National Astronomical Observatory of Japan, and the University of Tsukuba, used the Atacama Large Millimeter/submillimeter Array (ALMA) in Chile to observe a newborn star located in the Large Magellanic Cloud, one of the closest neighbors of our galaxy. As a result, a number of radio emission lines from various molecular gas are detected, which indicates the presence of a hot molecular core associated with the observed newborn star.

The observations have revealed that the hot molecular core in the Large Magellanic Cloud shows significantly different chemical compositions as compared to similar objects in our galaxy. In particular, the results suggest that simple organic molecules such as methanol are deficient in this galaxy, suggesting a potential difficulty in producing large organic species indispensable for the birth of life. The research team suggests that the unique galactic environment of the Large Magellanic Cloud affects the formation processes of molecules around a newborn star, and this results in the observed unique chemical compositions. 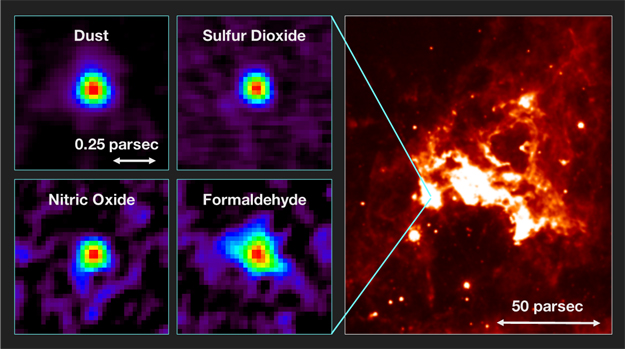 Figure 2. Left: Distributions of molecular line emission from a hot molecular core in the Large Magellanic Cloud observed with ALMA. Emissions from dust, sulfur dioxide (SO2), nitric oxide (NO), and formaldehyde (H2CO) are shown as examples. Right: An infrared image of the surrounding star-forming region (based on the 8 micron data provided by the NASA/Spitzer Space Telescope).
Credit: T. Shimonishi/Tohoku University, ALMA (ESO/NAOJ/NRAO

“This is the first detection of an extragalactic hot molecular core, and it demonstrates the great capability of new generation telescopes to study astrochemical phenomena beyond our galaxy,” said Dr. Takashi Shimonishi, an astronomer at Tohoku University, Japan, and the paper’s lead author. “The observations have suggested that the chemical compositions of materials that form stars and planets are much more diverse than we expected. “

This work is supported by a Grant-in-Aid from the Japan Society for the Promotion of Science (15K17612).

The Atacama Large Millimeter/submillimeter Array (ALMA), an international astronomy facility, is a partnership of the European Organisation for Astronomical Research in the Southern Hemisphere (ESO), the U.S. National Science Foundation (NSF) and the National Institutes of Natural Sciences (NINS) of Japan in cooperation with the Republic of Chile. ALMA is funded by ESO on behalf of its Member States, by NSF in cooperation with the National Research Council of Canada (NRC) and the National Science Council of Taiwan (NSC) and by NINS in cooperation with the Academia Sinica (AS) in Taiwan and the Korea Astronomy and Space Science Institute (KASI). ALMA construction and operations are led by ESO on behalf of its Member States; by the National Radio Astronomy Observatory (NRAO), managed by Associated Universities, Inc. (AUI), on behalf of North America; and by the National Astronomical Observatory of Japan (NAOJ) on behalf of East Asia. The Joint ALMA Observatory (JAO) provides the unified leadership and management of the construction, commissioning and operation of ALMA.