Physicists from the Technical University of Munich (TUM) have succeeded in detecting a time-resolved supernova signal in the Earth’s microfossil record.

As the group of Prof. Shawn Bishop could show, the supernova signal was first detectable at a time starting about 2.7 Million years ago. According to the researcher’s analyses, our solar system spent one Million years to transit trough the remnants of a supernova.

When massive stars with more than ten solar masses have, at the end of their evolution, consumed all of their nuclear fuel supply, they collapse under their gravity and terminate in so-called core-collapse supernovae. Thereby they eject huge amounts of matter into their surroundings. If a supernova occurs sufficiently close to our solar system, it should leave traces of supernova debris on Earth, in the form of specific radioisotopes.

Among the elemental species known to be produced in these stars, the radioisotope Fe-60 stands out: This radioisotope has no natural, terrestrial production mechanisms; thus, a detection of Fe-60 atoms within terrestrial reservoirs is proof for the direct deposition of supernova material within our solar system.

An excess of Fe-60 was already observed in around two million year old layers of a ferromanganese (FeMn) crust retrieved from the Pacific Ocean and, most recently, in lunar samples. These Fe-60 signals have been attributed to depositions of supernova ejecta. However, due to the slow growth rate of the FeMn crust, the Fe-60 signal had a poor temporal resolution; while lunar regolith cannot record time information because sedimentation does not occur on the moon. 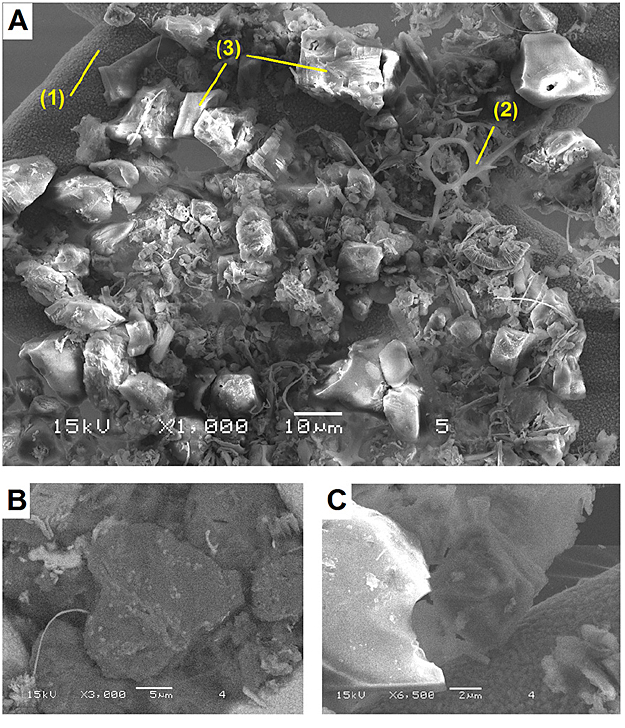 Scanning electron microscopy images of magnetic extracts obtained from representative sediment samples of core 848 over the 2.41-Ma to 2.62-Ma age interval. (A) Overview of the extract showing prominent features including (i) the copper sample-holding grid, (ii) large grains consisting mainly of CaCO3 and SiO2, and (iii) diatoms. (B) Image of a titanomagnetite grain (dark gray octahedron in the center) of most likely lithogenic origin. (C) Image of an octahedral titanomagnetite (dark, in the center) with small-grained Fe-bearing minerals adhering on its surface (bright spots). All images have been obtained with a JSM5900LV SEM (Jeol).

Now for the first time, physicists of the group of Shawn Bishop, TUM Professor on Nuclear Astrophysics, succeeded in discovering a time-resolved supernova signal in the Earth’s microfossil record, residing in biogenically produced crystals from two Pacific Ocean sediment drill cores. The onset of the Fe-60 signal occurs at around 2.7 Million years and is centered at around 2.2 Million years. The signal significantly ends around 1.7 Million years.

“Obviously, the solar system spent on Million years to transit through the debris of a supernova,” says Shawn Bishop, who is also a principal investigator at the Excellence Cluster Universe.

To analyse the entire temporal structure of the Fe-60 signal in terrestrial samples, a geological reservoir with an excellent stratigraphic resolution and high Fe-60 sequestration and low Fe mobility is required, which preserves the Fe-60 fluxes nearly so as they were at the time of deposition, apart from Fe-60 radioactive decay.

These conditions are fulfilled in the marine sediments from the Pacific Ocean used in this study. At the time of the Fe-60 deposition, iron-sequestering bacteria that live in the ocean sediments incorporated the Fe-60 within their intracellularly-grown chains of magnetite nanocrystals (Fe3O4). After cell death they have fossilized into microfossils. These sediments have grown with a constant sedimentation rate, preserving the intrinsic temporal shape of the supernova signal. “Nevertheless, the Fe-60 concentration in these fossils is so low that it is detectable only by means of ultrasensitive accelerator mass spectroscopy (AMS)”, says Dr. Peter Ludwig, researcher in the group of Shawn Bishop. At the tandem accelerator at the Maier-Leibnitz Laboratory in Garching the physicists could refine the sensitivity of the method so that this discovery was possible the first time ever.

The most plausible progenitor star that gave rise to this supernova likely originated in the Scorpius-Centaurus OB association, as analyses of its relative motion have shown. Around 2.3 million years ago it was located at a minimum distance of about 300 light years to the solar system. Over the course of the last 10 to 15 million years, a succession of 15 to 20 supernovae has occurred in this star association. This series of massive stellar explosions has produced a largely matter-free cavity in the interstellar medium of a galactic arm of the Milky Way. Astronomers call this cavity, in which our solar system is located, the Local Bubble.

In addition to the TUM’s physicists there were also involved: Researchers from the Central Institute for Meteorology and Geodynamics, Geomagnetism and Gravimetry, Vienna, from the TUM Chemistry Department, Elektronenmikroskopie, as well as from the Helmholtz-Zentrum Dresden-Rossendorf, Helmholtz Institute Freiberg for Resource Technology, Dresden.

The research was funded by the German Research Foundation (DFG) and the Excellence Cluster Universe.