By Keith Cowing
Press Release
NASA
May 2, 2016
Filed under climate

Clouds may seem like distant, ephemeral features that have little to do with life on Earth. In fact, they affect everything from the viability of ecosystems, to how much carbon plants absorb, to the reproductive success of reptiles.

Adam Wilson compiled a global database of cloud cover while he was a postdoctoral researcher at Yale University. The database includes 15 years of satellite observations captured by the Moderate Resolution Imaging Spectroradiometer (MODIS) sensors on NASA’s Aqua and Terra satellites. Each day, the satellites acquire images of most of Earth’s surface, though clouds obscure the view more often than not in many parts of the world.

By combining all of the cloud observations from 2000 and 2014, Wilson (now at the University at Buffalo) and Yale colleague Walter Jetz generated a comprehensive global cloud climatology that reveals the distribution and seasonality of clouds. Using this new cloud database, NASA Earth Observatory generated maps of cloud seasonality and timing.

The map at the top of the page shows where cloud cover tends to be consistent throughout the year (white) and where it varies depending on the season (dark blue). Notice that much of India, southern Africa, and northern Australia experience vast swings in cloudiness throughout the year. The map below shows the timing of peak cloudiness within a given year. 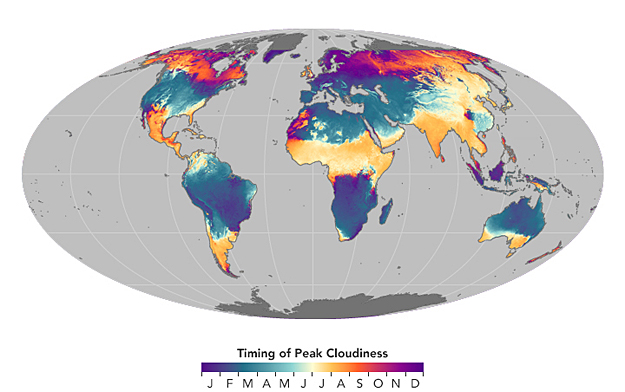 Cloud seasonality can have a crucial impact on ecosystems on the ground, so the new cloud atlas will be useful for mapping the boundaries of ecosystems. While tropical and subtropical forests thrive with steady cloud cover, tropical and subtropical savannas in Africa scrubland and in northern Australia have adapted to dramatic variations in cloudiness (and rainfall) by season.

Some of the most continuously cloudy areas – the Andes, the Congo River Basin, Indonesia, Borneo, and New Guineaare home to cloud forests, unique high-elevation ecosystems known for harboring remarkable biodiversity. To highlight how their new cloud climatology can be useful to ecologists, Wilson and Jetz modeled the distribution of a songbird (the montane woodcreeeper) often found in cloud forests and a flowering plant from a semi-arid ecosystem of South Africa (king protea). They concluded that the new cloud climatology offers a better tool for predicting the geographic range of the two species than analysis of temperature and precipitation patterns, the standard method for predicting species range.

“We hope to see this data spread far and wide among policymakers and others involved in spatial planning and resource management,” noted Jetz. “We are already in the process of integrating this cloud data into biodiversity predictions offered as part of the Map of Life project.”

A Catalog Of Habitable Zone Exoplanets