Researchers have for the first time shown that ribose, a sugar that is one of the building blocks of genetic material in living organisms, may have formed in cometary ices.

To obtain this result, scientists at the Institut de Chimie de Nice (CNRS/Université Nice Sophia Antipolis) carried out a highly detailed analysis of an artificial comet created by their colleagues at the Institut d’Astrophysique Spatiale (CNRS/Université Paris-Sud). Along with other teams1, including one at the SOLEIL synchrotron, they propose the first realistic scenario for the formation of this key compound, which had never been detected in meteorites or cometary ices until now. Their findings, which shed new light on the emergence of life on Earth, are published in the journal Science dated 8 April 2016. 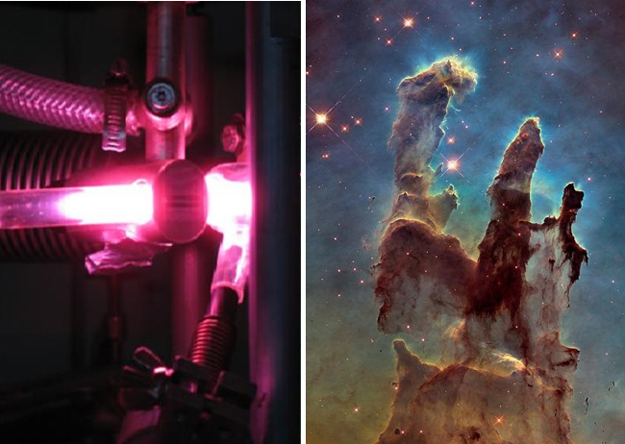 The genetic material of all living organisms on Earth, as well as of viruses, is made up of nucleic acids, DNA and RNA2. RNA, which is considered more primitive, is thought to have been one of the first molecules characteristic of life to appear on Earth. Scientists have long wondered about the origin of these biological compounds. Some of them believe that the Earth was seeded by comets or asteroids that contained the basic building blocks needed to form such molecules.

And indeed several amino acids (the components of proteins) and nitrogenous bases (one of the components of nucleic acids) have already been found in meteorites, as well as in artificial comets produced in the laboratory3. However, ribose, the other key component of RNA, had never yet been detected in extraterrestrial material or created in the laboratory under ‘astrophysical’ conditions. Now, by simulating the evolution of the interstellar ice making up comets, French research teams have successfully obtained ribose, a key step in understanding the origin of RNA–and therefore of life. 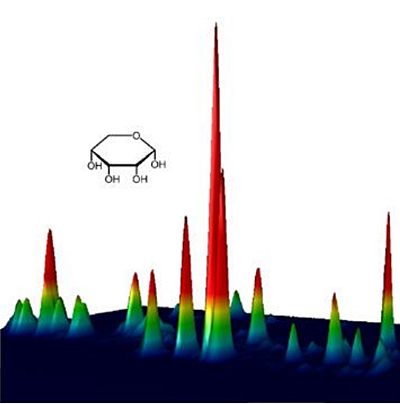 Ribose (and related molecules such as arabinose, lyxose and xylose) have been detected in pre-cometary ice analogs using multidimensional gas chromatography. Ribose makes up the backbone of ribonucleic acid (RNA), thought to be the genetic material of the first living organisms. © Cornelia Meinert (CNRS)

As a first step, an artificial comet was produced at the Institut d’Astrophysique Spatiale. By placing a representative mixture of water (H2O), methanol (CH3OH) and ammonia (NH3) in a high vacuum chamber at – 200 °C, the astrophysicists simulated the formation of dust grains coated with ice, the raw material of comets. This material was irradiated with UV, as in the molecular clouds where these grains form. The sample was then warmed to room temperature, as in comets when they approach the Sun.

Its composition was analyzed at the Institut de Chimie de Nice, optimizing an extremely sensitive and accurate method (multidimensional gas chromatography coupled with time-of-flight mass spectrometry). Several sugars were detected, including ribose. Their diversity and relative abundances suggest that they were formed from formaldehyde (a molecule found in space and on comets that forms in large quantities from methanol and water).

Although the existence of ribose in real comets remains to be confirmed, this discovery completes the list of the molecular building blocks of life that can be formed in interstellar ice. It also lends further support to the theory that comets are the source of the organic molecules that made life possible on Earth, and perhaps elsewhere in the Universe.