Searching for Extraterrestrials Who Might Have Found Us First

Are we alone in the universe? To answer this question, astronomers have been using a variety of methods in the past decades to search for habitable planets and for the signals from extraterrestrial observers.

The first part of this venture has been highly successful: More than 2000 planets around distant stars — so called exoplanets — have been found so far. The second part, the search for extraterrestrial intelligence (SETI), has not yet been successful. Maybe the search strategy has not been optimized until now, say researchers from the Max Planck Institute for Solar System Research (MPS) in Gttingen and from McMaster University in Canada.

They suggest that future searches focus on that part of the sky in which distant observers can notice the yearly transit of the Earth in front of the Sun. Observers in this zone could have discovered Earth with the same techniques that are used by terrestrial astronomers to discover and characterize exoplanets. According to the researchers, the probability that extraterrestrials are already deliberately sending us signals is much higher in this part of the sky. This strategy reduces the region that needs to be searched to about two thousandths of the sky, drastically reducing the amount of data to be analyzed.

When a planet passes in front of its host star, it causes a small transient dimming of the star. This so called transit can be measurable, depending on the size on the planet and the sensitivity of the instrument. In fact, the majority of the exoplanets known to us today have been discovered with this transit method. A similar technique, called transit spectroscopy, might enable astronomers in the future to scan the atmospheres of exoplanets for gaseous indicators of life.

In a first step, the two researchers identified the region in the sky from which one sees the transits less than half a solar radius from the center of the solar disk. The possible exoplanetary systems that offer this perspective are all located in a small strip in the sky, the projection of the Earth’s orbit around the Sun (the ecliptic) onto the celestial sphere. The area of this strip amounts only to about two thousandths of the entire sky. 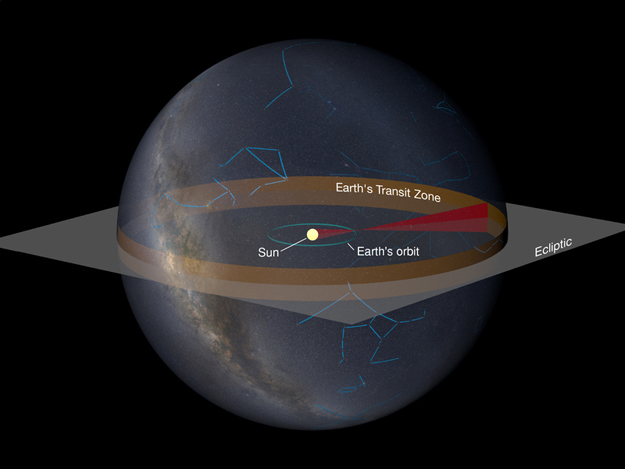 Narrow band: the image illustrates the transit zone, in which distant observers could see the Earth pass in front of the Sun. Axel Quetz (MPIA) / Axel Mellinger, Central Michigan University

“The key point of this strategy is that it confines the search area to a very small part of the sky. As a consequence, it might take us less than a human life span to find out whether or not there are extraterrestrial astronomers who have found the Earth. They may have detected Earth’s biogenic atmosphere and started to contact whoever is home,” explains Ren Heller from the MPS.

Not every star is equally well suited as a home of extraterrestrial life. The more massive a star, the shorter is its life span. Yet, a long stellar life is considered a prerequisite for the development of higher life forms. Therefore the researchers compiled a list of stars that are not only in the advantageous part of the sky but also offer good chances of hosting evolved forms of life, that is, intelligent life. The researchers compiled a list of 82 nearby Sun-like stars that satisfy their criteria. This catalog can now serve as an immediate target list for SETI initiatives.

But astronomers are far from knowing every star in our Milky Way. The more distant a star, the dimmer its light appears. And the small, particularly long-lived stars are also particularly faint. In order to estimate how many stars in addition to the 82 nearby ones could reside in Earth’s transit zone, Heller and his Canadian colleague Ralph Pudritz projected the celestial sphere onto a model of the stellar density of our galaxy. The result: about 100,000 nearby stars could harbor planets with inhabitants who could have discovered us and who could be trying to contact us.

A part of these planets might be discovered with the PLATO mission of the European Space Agency, scheduled for 2024. Ren Heller from MPS is also involved in this mission. PLATO will use the transit method to find small planets, some of them possibly Earth-like, around bright stars.

“PLATO might even detect the transits of exoplanets, whose possible inhabitants would be able to see the Earth transiting the Sun,” Heller adds. “Such a crazy setup would offer both them and us the possibility of studying each others’ planets with the transit method.”