Simulations by researchers at Tokyo Institute of Technology and Tsinghua University indicate that Earth-like planets are more likely to be found orbiting Sun-like stars rather than lower-mass stars that are currently targeted, in terms of water contents of planets.

The search for habitable planets currently focuses on so-called M dwarfs – stars with less than half the mass of the Sun. These stars are thought to have more habitable orbiting planets that are easier to find compared with G dwarfs – stars that have a similar mass to the Sun. However, according to recent simulations by a collaborative research team composed of Shigeru Ida at Tokyo Tech and Feng Tian at Tsinghua University, M dwarf systems may not be the best places to look.

For planets to be habitable, they must orbit stars within the ‘habitable zone’ where it is not too hot or too cold. In addition, recent studies on habitability of planets suggest that the water-land ratio must be similar to the Earth. That is, the water mass fraction should not be far from that of the Earth’s (~0.01wt%): planets with too much water (> 1 wt%)”ocean planets”lead to an unstable climate and lack of nutrient supply; and water-poor planets like Venus “dune planets”become too arid for inhabiting.

Whereas G dwarfs stars with the mass of our Sun keep almost constant luminosity during the ‘pre-main sequence’ of their evolution, the luminosity of M dwarfs decreases by more than an order of magnitude during this stage. This means that planets with the right amount of water at the right distance from M stars may become too arid from over-exposure during the higher-luminosity early pre-main sequence period, while ocean planets retain their large amount of water.

Ida and Tian simulated planet distributions around stars with 0.3, 0.5 and 1.0 times the mass of the Sun. They then applied a model for water loss and accounted for the change in luminosity. They found that Earth-mass planets with Earth-like water contents occur 10100 times less frequently around M dwarfs than around G dwarfs. They conclude, “We suggest that stars close to the size of the Sun should be the primary targets for detecting Earth-like planets.” 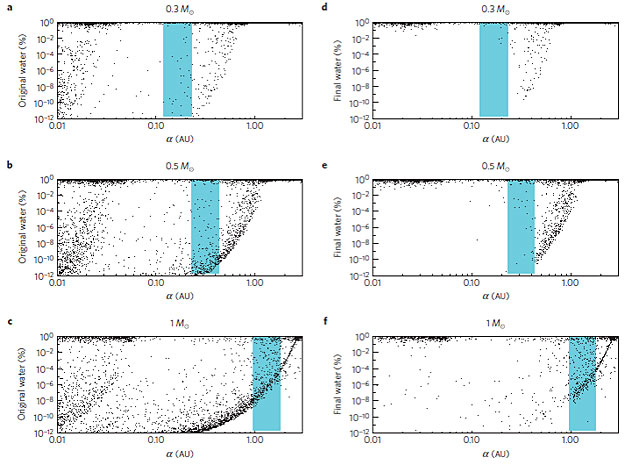 Figure caption: Water mass fractions versus orbital distances of Earth-mass planets 90Myr after entering the pre-main sequence. ac, Results from simulations of stars with 0.3 (top), 0.5 (middle) and 1 (bottom) solar masses without considering the pre-main sequence stellar luminosity evolution and water loss. df, Results considering the stellar luminosity evolution and water loss. The habitable zones of the stars in the main sequence phase are marked by blue shaded areas. Stellar masses are marked in the panels.

Planets are understood to form alongside stars. As matter condenses under gravity to form the star, the surrounding circulating matter begins to flatten into a protoplanetary disk, a little like a spun clump of dough flattening to form a pizza base. Matter in this disk coalesces to form planets.

Several complex and competing processes are in play during planetary formation. The initial mass of the coalescing planet, the distribution of material feeding into the formation of stars and surrounding systems, density, star luminosity, orbit and potential collisions are all factors that affect planetary formation and the final characteristics of the planet formed.

Models incorporating the various factors have been developed, tested against observations and augmented, making it possible to simulate the planetary bodies likely to form and their characteristics. However until this study nobody had modelled how the change in luminosity of M stars might affect the surface water content of planets in the habitable zone.

As well as simulations there are a number of projects and facilities to provide data on real planets and their characteristics. Bulk density measurements and multiband spectral data allow planets with Earth-like water contents to be distinguished from ocean or dune planets by future observations.

The simulations by Ida and Tian indicated that for 1000 stars of 0.3 solar masses there might be 69,000 orbiting planetary bodies, of which 5,000 had a similar mass to the Earth and 55 were in the habitable zone. Those in the habitable zone included 31 ocean planets. 23 dune planets and just 1 with Earth-like water content.

For 1000 stars with half the mass of the Sun the simulation produced 75,000 planetary bodies, of which more than 9000 had Earth-like masses, and 292 were in the habitable zone: 60 ocean planets; 220 dune planets and 12 with Earth-like water content.

Finally for 1000 simulated stars with a similar mass to the Sun, there were 38,000 planetary bodies, 8,000 with Earth-like masses and 407 in the inhabitable zone. Those in the habitable zone included 91 ocean planets and 45 dune planets, but 271 – the vast majority had Earth-like water content.

Although the detailed numbers in the statistics are not important, Ida and Tian highlight the contrast in the fraction of planets in the habitable zones having Earth-like water content between Sun-like stars and lower-mass stars is significant. At the same time, they caveat that further studies are needed to determine how efficiently water is retained in the mantle, as well as the evolution of its release to the surface.

About Tokyo Institute of Technology

As one of Japan’s top universities, Tokyo Institute of Technology seeks to contribute to civilization, peace and prosperity in the world, and aims at developing global human capabilities par excellence through pioneering research and education in science and technology, including industrial and social management. To achieve this mission, we have an eye on educating highly moral students to acquire not only scientific expertise but also expertise in the liberal arts, and a balanced knowledge of the social sciences and humanities, all while researching deeply from basics to practice with academic mastery. Through these activities, we wish to contribute to global sustainability of the natural world and the support of human life.