Martian Clay Contains Chemical Implicated in the Origin of Life

Researchers from the University of Hawaii at Manoa NASA Astrobiology Institute (UHNAI) have discovered high concentrations of boron in a Martian meteorite. When present in its oxidized form (borate), boron may have played a key role in the formation of RNA, one of the building blocks for life. The work was published on June 6 in PLOS One.

image: Thin section of the Martian meteorite MIL 090030 analyzed by the UHNAI researchers.

The Antarctic Search for Meteorites team found the Martian meteorite used in this study in Antarctica during its 2009-2010 field season. The minerals it contains, as well as its chemical composition, clearly show that it is of Martian origin.

Using the ion microprobe in the W. M. Keck Cosmochemistry Laboratory at UH, the team was able to analyze veins of Martian clay in the meteorite. After ruling out contamination from Earth, they determined boron abundances in these clays are over ten times higher than in any previously measured meteorite.

“Borates may have been important for the origin of life on Earth because they can stabilize ribose, a crucial component of RNA. In early life RNA is thought to have been the informational precursor to DNA,” said James Stephenson, a UHNAI postdoctoral fellow.

RNA may have been the first molecule to store information and pass it on to the next generation, a mechanism crucial for evolution. Although life has now evolved a sophisticated mechanism to synthesize RNA, the first RNA molecules must have been made without such help. One of the most difficult steps in making RNA nonbiologically is the formation of the RNA sugar component, ribose. Previous laboratory tests have shown that without borate the chemicals available on the early Earth fail to build ribose. However, in the presence of borate, ribose is spontaneously produced and stabilized. 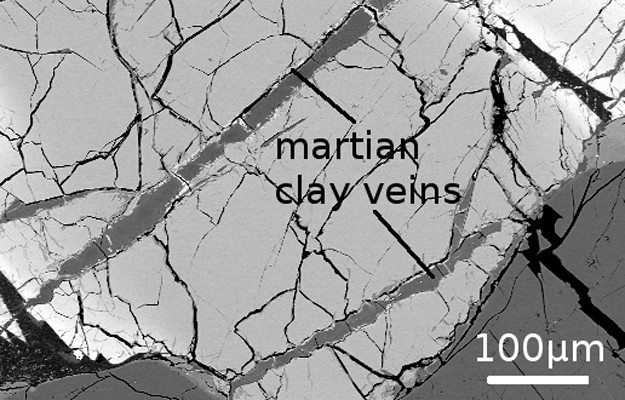 This work was born from the uniquely interdisciplinary environment of UHNAI. The lead authors on the paper, Stephenson, an evolutionary biologist, and Lydia Hallis, a cosmochemist who is also a UHNAI postdoctoral fellow, first came up with the idea over an after-work beer. “Given that boron has been implicated in the emergence of life, I had assumed that it was well characterized in meteorites,” said Stephenson. “Discussing this with Dr. Hallis, I found out that it was barely studied. I was shocked and excited. She then informed me that both the samples and the specialized machinery needed to analyze them were available at UH.”

On our planet, borate-enriched salt, sediment and clay deposits are relatively common, but such deposits had never previously been found on an extraterrestrial body. This new research suggests that when life was getting started on Earth, borate could also have been concentrated in deposits on Mars.

The significance goes beyond an interest in the red planet, as Hallis explains: “Earth and Mars used to have much more in common than they do today. Over time, Mars has lost a lot of its atmosphere and surface water, but ancient meteorites preserve delicate clays from wetter periods in Mars’ history. The Martian clay we studied is thought to be up to 700 million years old. The recycling of the Earth’s crust via plate tectonics has left no evidence of clays this old on our planet; hence Martian clays could provide essential information regarding environmental conditions on the early Earth.”

The presence of ancient borate-enriched clays on Mars implies that these clays may also have been present on the early Earth. Borate-enriched clays such as the one studied here may have represented chemical havens in which one of life’s key molecular building blocks could form.

UHNAI is a research center that links the biological, chemical, geological, and astronomical sciences to better understand the origin, history, distribution, and role of water as it relates to life in the universe.

Founded in 1967, the Institute for Astronomy at the University of Hawaii at Manoa conducts research into galaxies, cosmology, stars, planets, and the Sun. Its faculty and staff are also involved in astronomy education, deep space missions, and in the development and management of the observatories on Haleakala and Mauna Kea.