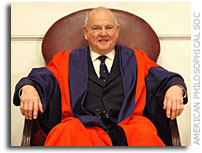 Baruch S. Blumberg, President of the American Philosophical Society from 2005-2011, died on April 5, 2011 at the age of 85. At the time, he was visiting the NASA Ames Research Center in California as a featured speaker at the International Lunar Research Park Exploratory Workshop.

Dr. Blumberg received the Nobel Prize in Medicine in 1976 for identifying the Hepatitis B virus and for making “discoveries concerning new mechanisms for the origin and dissemination of infectious diseases.” During his long and illustrious career he served as the first director of the NASA Astrobiology Institute, Distinguished Scientist at Fox Chase Cancer Center, and Master of Balliol College, Oxford University.

Dr. Blumberg’s family has requested that memorial gifts be sent to the American Philosophical Society for the Baruch S. Blumberg Fund for the Lewis and Clark Grants for Exploration and Field Research. Dr. Blumberg recognized that field research had been a large part of his own scientific experience, and had directly affected his work with the Hepatitis B virus. He established the Lewis and Clark Grants in 2004 (during the bicentennial year of their epic journey) to assist younger scientists and scholars with projects at a critical time in their careers. “I believe that a passion for exploration is deeply rooted in the American character, and it is regrettable that funding for field studies is so difficult to obtain,” he said. Including this year’s projected grants, the Lewis and Clark program will have supported more than 250 emerging scientists and scholars since its founding.